Experiments have spotted anomalies hinting at a new type of neutrino, one that would go beyond the standard model of particle physics and perhaps open a portal to the dark sector. But no one has ever directly observed this hypothetical particle. 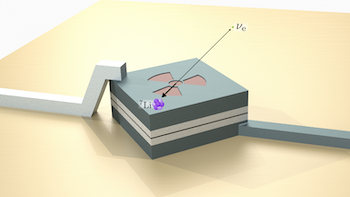 Now a quantum dark matter detector and a proposed particle accelerator dreamt up by machine learning are poised to prove whether the sterile neutrino exists.

The IsoDAR cyclotron would deliver ten times more beam current than any existing machine, according to the team at MIT that designed it. Taking up only a small underground footprint, the cyclotron may give definitive signs of sterile neutrinos within five years.

At the same time, that intense beam could solve a major problem in cancer treatment: producing enough radioactive isotopes for killing cancerous cells and scanning tumors. The beam could produce high quantities of medical isotopes and even let hospitals and smaller laboratories make their own. 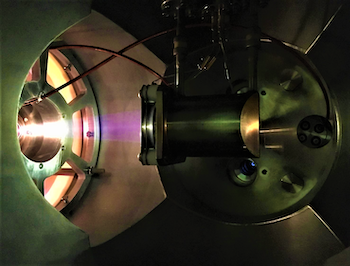 A picture of the ion source used by the IsoDAR cyclotron team, which shows the ion beam glowing inside their device. Credit: IsoDAR collaboration

“There is a direct connection between the technology that can be used to understand our universe, and the technology which can be used to save people's lives,” said Loyd Waites, an MIT PhD candidate who will discuss the plans at the 2021 Fall Meeting of the APS Division of Nuclear Physics.

Of the existing sterile neutrino hunters, one of the most powerful in the world possesses a single detector. The BeEST (pronounced “beast”) may sound like a behemoth, but the experiment uses one quantum sensor to measure nuclear recoils from the “kick” of a neutrino.

This clean method searches for the mysterious particle without the added hurdle of looking for its interactions with normal matter. Just one month of testing yielded a new benchmark that covers a wide mass range—applicable to much bigger sterile neutrino experiments like KATRIN.

“This initial work already excludes the existence of this type of sterile neutrino up to 10 times better than all previous decay experiments,” said Kyle Leach, an associate professor at the Colorado School of Mines, who presents the first round of results (recently reported in Physical Review Letters) at the meeting.

The BeEST, a collaboration of 30 scientists from 10 institutions in North America and Europe, is also the first project to successfully use beryllium-7, regarded as the ideal atomic nucleus for the sterile neutrino hunt. Next up: scaling the BeEST setup to many more sensors, using new superconducting materials.

The IsoDAR Experiment and Medical Applications of a High Power Cyclotron (PJ.8)

First Limits on sub-MeV BSM Physics in the Neutrino Sector From Phase-II of the BeEST Experiment (FK.3)