When a drop of liquid lands on a surface much hotter than its boiling point, the bottom layer of the drop vaporizes instantly. The gas pressure from the vapor layer keeps the liquid droplet from touching the hot surface. The vapor layer is too thin to be easily seen but it’s insulating enough to keep the liquid just below its boiling point. Instead of instantly boiling away, the droplet can survive for several minutes. This image shows a droplet of liquid water experiencing this phenomenon, which is called the Leidenfrost effect.

The water droplet shown below was dropped on to a heated plate or polished aluminum and illuminated by a Helium-Neon (red range) laser. Notice the circulation pattern in the droplet, highlighted by reflective particles suspended in the liquid. The bottom "droplet" is a reflection of the actual water drop. 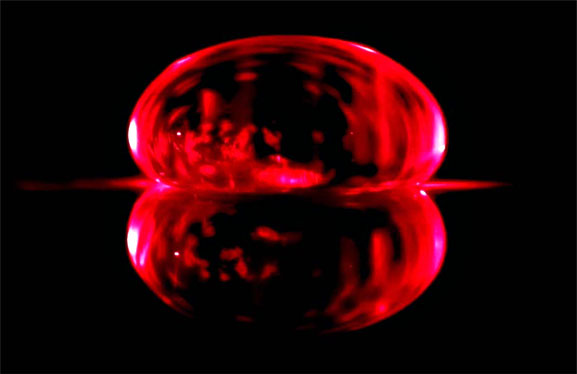 This photograph was taken using a handheld digital camera at low speed approximately 5cm from the droplet.
Image credit: Ilya Lisenker of University of Colorado - Boulder.

This image was taken as part of Jean Hertzberg's "Flow Visualization: The Physics and Art of Fluid Flow" mechanical engineering class at the University of Colorado - Boulder, and will be shown at the 63rd Annual Meeting of the APS Division of Fluid Dynamics (DFD), November 2010, in San Antonio, Texas.