NASA's most advanced Mars rover, Curiosity, landed on Mars August 6, 2012, as part of the Mars Science Laboratory Mission. Curiosity, hanging by ropes from a rocket backpack, touched down onto Mars after a 36-week flight. Curiosity will conduct a two-year investigation looking particularly for signs that Mars ever had conditions or ingredients favorable for microbial life. 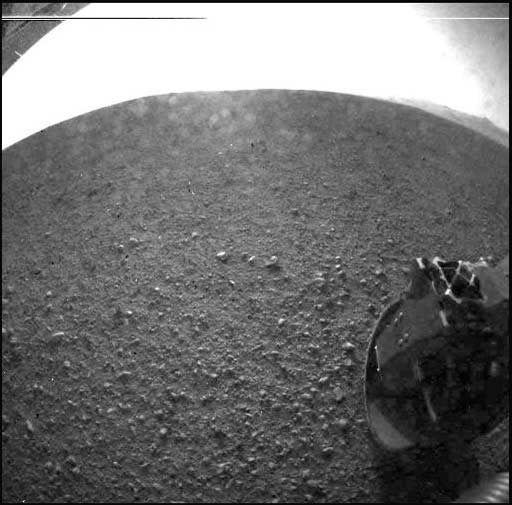 This is one of the first images taken by NASA's Curiosity rover after it landed on Mars on the morning of August 6. The picture was taken through a fisheye wide-angle lens on the left "eye" of a stereo pair of Hazard-Avoidance cameras (Hazcams) on the left-rear side of the rover. The image is one-half of full resolution.

The clear dust cover that protected the camera during landing has been sprung open. Part of the spring that released the dust cover can be seen at the bottom right, near the rover's wheel. On the top left, part of the rover's power supply is visible.

Some dust appears on the lens even with the dust cover off. The cameras are looking directly into the sun, so the top of the image is saturated. The lines across the top are an artifact called "blooming" that occurs in the camera's detector because of the saturation.