This image shows a two-dimensional granular experiment using bidisperse photo-elastic disks. Starting from a stress-free state, a box is filled with discs. The packing is disordered, and initially, any disc contacts are weak. These discs were subjected to pure shear deformation. The discs were squeezed vertically while being expanded with equal displacement horizontally, so that the total area remained fixed.

The response to the shear is that the unconnected discs formed a network of `force chains'. Within the chains, the shear also led to increased pressure and shear stress. Following each deformation step, contact forces between individual disks were determined from the resulting color changes in the discs, as shown in the images below.

Aspects of this project are funded by NSF grant DMR0555431 and ARO grant W911NF-07-1-0131-00. Collaborators include Jie Zhang, Trushant Majmudar, and Bob Behringer, all at Duke University.

This image was displayed at the APS March Meeting, New Orleans, as part of the 2008 Topical Group on Statistical and Nonlinear Physics Gallery of Nonlinear Images. 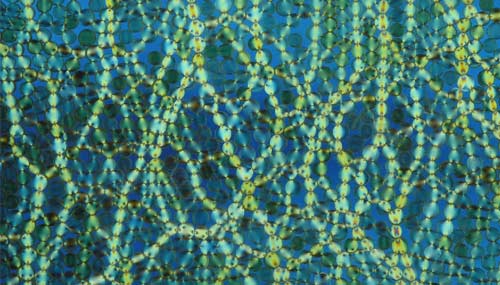 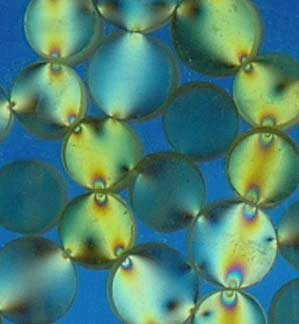 The 'force chains' and the contact force color patterns can both be seen in this photograph. In the larger image, it is easy to see how the discs formed chains during shear. In the detail image (left) of the same photograph, the force patterns are clear. Particles carrying more than average force are brighter. A lighter color signifies contact and the darker, original color indicates no contact.  See video of discs forming chains during shear.