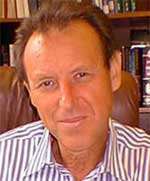 "For pioneering contributions to the generation of ultra-short wavelength and femtosecond lasers and x-ray laser microscopy."


Szymon Suckewer is Professor of Mechanical & Aerospace Engineering at .  He received his M.S. degree from in 1962, Ph.D in 1966 and D.Sc in 1971 from , all in physics. He emigrated to US in 1975 and joined s Plasma Physics Laboratory. His initial work at PPPL was on spectroscopic diagnostics of high temperature plasma and in parallel effort on developing his idea about recombination x-ray laser in magnetically confined plasma, which he and his group successfully demonstrated in 1984. This laser was used for X-ray microscopy in 1987 -1991.

In 1985 Suckewer recognized the necessity of using ultrashort pumping pulses of high intensity for the development much shorter wavelengths X-ray lasers. He expanded his group to proceed with the development of an ultrashort pulse KrF laser, which was completed in 1987 and generated intensity of 2 x 1018 W/cm2.  This device was used to generate lasing action at 13.5 nm in Li III ions in transition to ground state in 1996.

In 1987 Dr. Suckewer joined the of the and Applied Sciences as a Professor. He is a Fellow of the APS and the OSA.

Presently Prof. Suckewer and his group are developing a powerful femtosecond laser based on Raman amplification and compression in plasma.