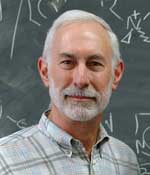 "For seminal contributions to laser science in the development of ultrafast nonlinear and multidimensional vibrational spectroscopy."


Michael D. Fayer received both his B.S. (1969) and Ph.D. (1974) in chemistry from the University of California at Berkeley.  He started his academic career at Stanford University in 1974 as an Assistant Professor. Today he is the David Mulvane Ehrsam and Edward Curtis Franklin Professor of Chemistry at Stanford University.  Fayer is a pioneer in the development and application of ultrafast non-linear laser techniques for the study of complex molecular systems ranging from solids at liquid helium temperature to flames.  Currently his work emphasizes liquids and biological molecules.  In large part due to his work, ultrafast nonlinear and coherent spectroscopic techniques such as transient gratings, photon echoes, and vibrational echoes have become powerful techniques that have spread worldwide for studying complex molecular systems in chemistry, biophysics, and materials science.  Michael Fayer is a member of the National Academy of Sciences of the United States of America and of the American Academy of Arts and Sciences.  He has won a number of national and international awards including the Ellis R. Lippincott Award given by the Optical Society of America, the E. Bright Wilson Award for Spectroscopy given by the American Chemical Society and the Earl K. Plyler Prize for Molecular Spectroscopy given by the American Physical Society.