The Universe of Gravitational Waves 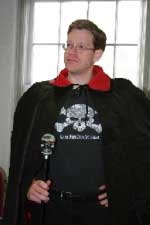 Topic: The Universe of Gravitational Waves

Time and Location: 1:00 p.m., with Q&A to follow; in a 1st floor conference room at the American Center for Physics (www.acp.org), 1 Physics Ellipse, College Park, MD - off River Rd., between Kenilworth Ave. and Paint Branch Parkway.

Abstract: Now that LIGO has reported two clear detections of gravitational waves, the community is eager for more. LIGO itself, and its sister ground-based detectors, will be improved dramatically, but the news is even better than that for gravitational-wave science. The reason is that there are ongoing efforts, and planned missions, that will explore three other gravitational wave frequency ranges. These observations will reveal to us a vast range of physics and astrophysics, from the very early Universe to the mergers of supermassive black holes. After giving a brief overview of gravitational waves, I will describe the anticipated science for each of these frequency ranges, as well as the hope for the unexpected.

Biography: Cole Miller was born and raised in Michigan. He went to Caltech for graduate school in physics, then to the University of Illinois and the University of Chicago for postdoctoral experiences. He joined the University of Maryland astronomy faculty in 1999. He feels that one of the great benefits of being an astrophysicist is that he gets to travel to so many places for conferences; to date, he has been to thirty countries in addition to the US, which has given him many perspectives that he values.