Quantum Computer Programming and all that 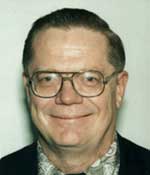 Topic: Quantum Computer Programming and all that

Time and Location: 1:00 PM, with Q&A to follow; in a 1st floor conference room at the American Center for Physics (www.acp.org), 1 Physics Ellipse, College Park, MD — off River Rd., between Kenilworth Ave. and Paint Branch Parkway.

Abstract: The Quantum Computer has become all the rage recently. Programming them is a much different skill. How can you debug a program when examining its state changes it? How can we apply sound language principles to this esoteric device? We should not rely on the bottom-up approach of Physics. How can we use top-down approaches in creating viable QC programs. What does Denotational Semantics tell us about QC Programming? Why a QC programmer need not be a physicist. The “and all that” subtitle lets me address related topics, such as Programming the Universe.

Biography: Dr. Rudolph A. Krutar received his B.S. degree in 1966 from Carnegie Institute of Technology and his Ph.D. in Computer Science in 1976 from Carnegie-Mellon University. He considers himself a programming language/system design specialist. Between these degrees he was an associate professor at NYU’s Courant Institute of Mathematical Sciences and an assistant professor at the University of Utah. Then he worked at the U.S. Naval Research Laboratory for 24 years, during which he spent one year on sabbatical at UNC-Raleigh studying how we should eventually program quantum computers. He spoke many times of his design for the Rabi Quantum Computer, notably at UNC-Chapel Hill, NOAA’s Forecast Systems Laboratory in Boulder CO, a NATO-sponsored workshop on New Directions in Computer Programming.

After retiring a week before 9/11, he helped George Mason University create a PhD tract in Quantum Information Sciences. He is currently writing a book on “Rebuilding the Universe from the Quarks Up.” Flyers for that book will be available.