MESSENGER at Mercury: Water, Sulfur and Other Geochemical Surprises from the Innermost Planet 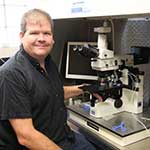 Topic: MESSENGER at Mercury: Water, Sulfur and Other Geochemical Surprises from the Innermost Planet

Time and Location: 1:00 pm, with Q&A to follow; in a 1st floor conference room at the American Center for Physics (www.acp.org), 1 Physics Ellipse, College Park, MD — off River Rd., between Kenilworth Ave. and Paint Branch Parkway.

Abstract: As the smallest planet in our solar system, and the closest to the Sun, Mercury represents an end-member of planetary formation processes. Although visible to the naked eye, it is difficult to study due to its proximity to the Sun. Astronomical observations from Earth and a brief visit by a spacecraft in the early 1970s revealed Mercury to be a highly unusual and intriguing planet, with a higher density than other worlds and an Earth-like magnetic field, despite being much smaller than the Earth. Since March of 2011, NASA's MESSENGER spacecraft has been in orbit around Mercury and its scientific instruments have returned a wealth of scientific data about the planet's surface, interior, magnetic field, and very tenuous atmosphere (‘exosphere’). This talk will review the results of MESSENGER’s geochemical instrument suite, with a focus on the discoveries that Mercury’s rocks are surprisingly volatile-rich and that large deposits of water ice, in some cases covered with hydrocarbon molecules, are present in permanently-shadowed impact craters.

Biography: Dr. Larry Nittler is a cosmochemist in the Department of Terrestrial Magnetism of the Carnegie Institution of Washington and Deputy Principal Investigator on NASA’s MESSENGER mission to Mercury. He obtained a PhD in Physics from Washington University in St. Louis in 1996. His analysis of measurements from the Near Earth Asteroid Rendezvous mission helped provide the first chemical analyses of a minor planet and he has led the analysis of x-ray fluorescence data from MESSENGER. In addition to remote-sensing geochemical measurements, his research focuses on the laboratory study of extraterrestrial materials, including meteorites and interplanetary dust particles as well as samples returned by NASA’s Genesis and Stardust missions, to understand the formation of the solar system, the galaxy, and the universe. He received the Alfred O. Nier prize of the Meteoritical Society in 2001 and was named a Fellow of the same society in 2010. Asteroid 5992 Nittler is named in his honor.