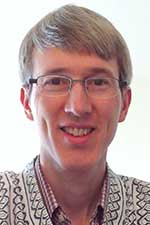 Time and Location: 1:00 p.m., with Q&A to follow; in a 1st floor conference room at the American Center for Physics (www.acp.org), 1 Physics Ellipse, College Park, MD - off River Rd., between Kenilworth Ave. and Paint Branch Parkway.

Abstract: The direct detection of gravitational waves by LIGO in 2015 was an amazing milestone. Our exquisitely constructed detectors have finally reached the sensitivity at which these exceedingly weak signals can be recorded and identified. LIGO detected two clear events, each from the merger of a pair of black holes. Those events, plus a third candidate, are already informing us about stellar evolution and allowing us to test the general theory of relativity in detail. I will talk about the operational status of LIGO and Virgo and the prospects for capturing more events in the near future. Besides further binary black hole events, we are also eager to detect binaries containing neutron stars, and potentially other signals. I will outline the possibilities for detecting gamma-ray bursts and/or other electromagnetic signals associated with gravitational-wave events (with a possible hint already from the Fermi spacecraft).

Biography: Peter Shawhan grew up in Iowa City and spent a significant amount of time hanging around the University of Iowa Department of Physics & Astronomy, where his father was a professor. Peter's grandfather also was a physicist and a tinkerer, so perhaps it's not too surprising that Peter followed in their footsteps, majoring in the subject at Washington University in St. Louis and going on to earn a Ph.D. at the University of Chicago. He then spent 7 years at Caltech as a postdoctoral fellow and staff scientist before joining the faculty at the University of Maryland, where he is an Associate Professor and the Associate Chair for Graduate Education. Dr. Shawhan also currently is Chair-Elect of the APS Division of Gravitational Physics.