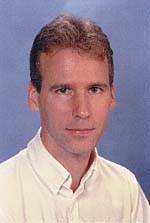 "For a wide range of high precision measure-ments to test fundamental interactions in atomic physics, especially fine structure splittings in helium as a measure of the fine structure constant, and for an innovative experimental technique to create atoms of antihydrogen."


Hessels is a professor and Canada Research Chair in the Department of Physics and Astronomy at York University in Toronto, Canada. He received his undergraduate degree at Calvin College in Grand Rapids, Michigan in 1984 and received his PhD at Notre Dame University in 1991. Since 1992, he has been a Faculty Member at York University and during this time he has received the John Charles Polanyi Prize (awarded to outstanding researchers in Ontario in the early stages of their careers), the Premier's Research Excellence Award (awarded to pre-eminent researchers in Ontario), the Herzberg Medal (awarded by the Canadian Association of Physicists for outstanding achievement in any field of research by a physicist under 40 years of age) and the Young Explorers Award (awarded by the Canadian Institute for Advanced Research to Canada's top 20 researchers aged 40 and under). His current research includes precision measurements of the n=2 triplet P fine structure of helium, which will lead to a precise determination of the fine-structure constant, as well as antihydrogen physics within the ATRAP collaboration.