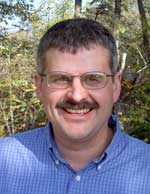 "For the development of SQUID multiplexers used in large-format arrays of superconducting transition-edge sensors that have impacted such fields as particle physics, astronomy, materials analysis, cosmology, and nuclear physics."


Kent Irwin leads the quantum sensors project at the National Institute of Standards and Technology in Boulder, Colorado, and is an adjoint professor of astrophysics and planetary science at the University of Colorado. He received a B.S. from the California Institute of Technology in 1988 and a PhD. from Stanford University in 1995. At Stanford, he studied under Blas Cabrera and developed the voltage-biased superconducting transition-edge sensor (TES). These devices are now being actively used for the sensitive measurement of electromagnetic signals from microwaves through gamma rays, and for the detection of dark matter, alpha particles, and neutrons.

At NIST, he and his group have developed multiplexed superconducting quantum interference devices that have made it possible to instrument large TES arrays, significantly enlarging their scope of application. His group is actively developing detector systems based on multiplexed TES arrays for astronomy, nuclear non-proliferation, materials analysis, and homeland defense applications. His research interests include precision measurements of electromagnetic signals for cosmological physics and the fundamental thermodynamic and quantum mechanical limitations of sensors and detectors. His team has received the Department of Commerce gold medal and the NIST applied research award for their work with superconducting detectors.