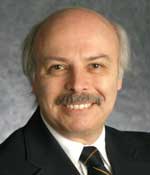 "For seminal contributions to the development of new experimental techniques based on photothermal science, and the application of these techniques to a variety of real-world problems."


Andreas Mandelis; Yale College Class of ’74.
Ph.D. in Applied Physics and Materials Science: Princeton University 1979.
He joined the electronics industry in the silicon Process R&D as a Member of Scientific Staff, Bell Northern Research Labs, Ottawa, in 1980-1981. Since 1981 he has been with the University of Toronto where he holds multiple appointments in the Department of Mechanical and Industrial Engineering, Electrical and Computer Engineering and the Institute for Biomaterials and Biomedical Engineering. He is the Director of the Center for Advanced Diffusion-Wave Technologies (CADIFT) at the University of Toronto.
Culminating his work on the foundations of the field of diffusion waves in matter, his scientific and technical research interests are focused on fundamental physical processes as they impact instrumentation science and signal generation in the fields of thermophysics, non-radiative and radiative phenomena in electronic, optical and biomedical materials, thermal-wave and diffusion-wave phenomena in electronic and photonic media. More recent interests include building the foundations of biothermophotonic and biophotoacoustic transport phenomena in hard (dental and bone) and soft tissues. Dr. Mandelis is the 2007 (inaugural) recipient of the Discovery Award in Science and Engineering, one of the Ontario Premier’s Innovation Awards. In 2008 he was awarded a Canada Research Chair (Tier 1) in Diffusion-Wave Sciences and Technologies and he became the recipient of the ASME 2009 Yeram Touloukian Award (and Medal) in Thermophysics. In 2009 he was awarded the Senior Prize of the International Photoacoustic and Photothermal Association and the Canadian Association of Physicists (CAP) Medal for Outstanding Achievement in Industrial and Applied Physics. In 2010 he was awarded a Killam Research Fellowship from the Canada Council for the Arts.