Soft Matter is a highly interdisciplinary field involving scientists, mathematicians and engineers and is one of the fastest growing areas of research today. Soft matter unites a broad class of physical states ranging from colloids and micelles to biological and granular matter that are easily deformed by external stresses. These materials share a common feature in that predominant physical behaviors occur at energy scales comparable with thermal energy and quantum aspects that are typically unimportant. Self-assembly, non-equilibrium, driven/active matter, frustration, topology and folding are just a few of the many diverse topics addressed by soft matter researchers.

A 2015 Physics Today article by Randall Kamien outlines DSOFT and the wide scope of soft matter in more detail. Also, Sharon Glotzer wrote an editorial in Physical Review Letters on soft matter in February 2015 that sheds light on the history of soft matter. In 2019 this unit became a Division, and was profiled in APS News.

DSOFT is on Facebook
Join us the new DSOFT Facebook Group for soft matter news, unit happenings and opportunities, and to connect with other DSOFT members. 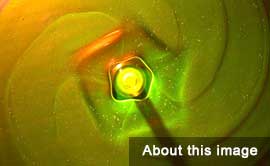