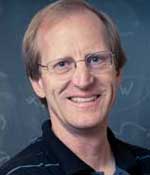 "For pathbreaking contributions to the calculation of perturbative scattering amplitudes, which led to a deeper understanding of quantum field theory and to powerful new tools for computing QCD processes."


Lance Dixon received his B.S. in Physics and Applied Mathematics from Caltech in 1982, and his Ph.D. in Physics from Princeton University in 1986. He was a post-doctoral fellow at SLAC for one year before his appointment as an assistant professor at Princeton. In 1989 he returned to SLAC as a Panofsky Fellow. He became an associate professor at SLAC in 1992, and full professor in 1998. He was awarded fellowship in the American Physical Society in 1995, and was named an outstanding referee for the APS in 2008. He has been a visiting professor at the Ecole Normale Superieure and Durham University, a visiting fellow at Clare Hall, Cambridge, and a scientific associate at CERN. His current research in phenomenology focuses on precision calculation in quantum chromodynamics, as applied to the Large Hadron Collider at CERN. On the formal side, he is interested in the multi-loop properties of gauge and gravitational theories, including N=4 super-Yang-Mills theory, whose amplitudes can be determined to high loop order using unitarity and other powerful analytic constraints, and N=8 supergravity, whose amplitudes shed light on the possibility of its perturbative finiteness.