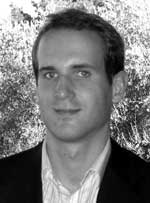 "Collective Dynamics in Dispersions of Anisotropic and Deformable Particles."


David Saintillan received a B.S. in engineering from Ecole Polytechnique in Paris, France, in 2001. He then attended Stanford University, where he performed his thesis work in the department of mechanical engineering under the supervision of Eric Shaqfeh and Eric Darve. He received his Ph.D. in 2006. His dissertation was entitled: Collective dynamics in dispersions of anisotropic and deformable particles. He is now a Junior Research Scientist at the Courant Institute of Mathematical Sciences of New York University, and will be joining the Department of Mechanical Science and Engineering of the University of Illinois at Urbana-Champaign as an Assistant Professor in January 2008. His current research interests include applications of fluid dynamics to biophysical problems, and non-linear electrokinetic effects in particulate flows and microfluidic applications.