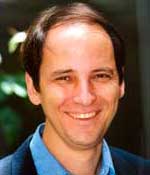 "For establishing the study of genetic network design principles as a foundation for the field of systems biology, and for pioneering work on the robustness of biological systems."


Stanislas Leibler did his undergraduate studies in physics at the University of Warsaw. He received three degrees from the University of Paris: an M.S. in theoretical physics in 1979, a Ph.D. in theoretical physics in 1981 and a second Ph.D. in physics in 1984. He spent a year at the École Normale Supérieure and became a tenured research fellow at the Centre d’Études de Saclay in 1984, staying until 1992. Dr. Leibler was also a visiting research associate at Cornell University from 1985 to 1987 and a visiting professor at the École Supérieure de Physique et Chimie Industrielles from 1989 to 1991. Dr. Leibler moved to Princeton University in 1992 as a professor in the department of physics, becoming a professor in the department of molecular biology in 1993. He spent the year from 1997 to 1998 as a visiting scientist at the European Molecular Biological Laboratory in Heidelberg, Germany.

During his last year at Princeton, from 2000 to 2001, Dr. Leibler was a Howard Hughes Medical Institute investigator. He moved to Rockefeller in 2001 and was a Tri-Institutional professor at Weill Cornell Medical College and the Sloan-Kettering Institute from 2003 to 2010. Since April 2009, Dr.Leibler has been sharing his time between Rockefeller and the Institute for Advanced Study in Princeton, where he is a professor at the School of Natural Sciences