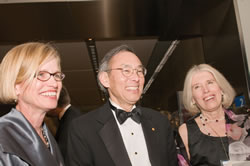 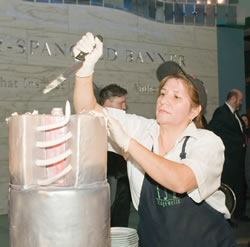 The LaserFest celebration featured a large birthday cake in the shape of Theodore Maiman’s original ruby laser. At some point, however, hunger overtook the crowd, and the cake was sacrificed. 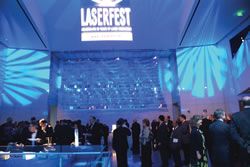 Flag Hall of the Museum of American History was redecorated for the LaserFest celebration.

Lasers play important roles in our lives, said U.S. Energy Secretary and Nobel Laureate Steven Chu, who served as the keynote speaker during a recent gala event at the Smithsonian Museum of American History.

Sponsored by APS and the Optical Society of America (OSA), the event was held to kick off LaserFest, a series of events celebrating 50 years of laser innovations and applications, including fiber optic communications, bar code scanners and CD players.

APS partnered with OSA, the Society of Photographic Instrumentation Engineers (S.P.I.E.)and the Institute of Electrical Electronic Engineers Photonics Society (IEEE) to organize events throughout the year to educate the public about the importance of lasers in modern society and honor physicists and engineers who made it all possible.

“Lasers are everywhere in society,” said Chu, who won the Nobel Prize in 1997 for optically trapping and cooling atoms using lasers.

“Many times, society doesn’t know how deeply embedded they are. The first 50 years have been great; hopefully, the next 50 years will be even better.”

More than 300 guests braved a cold February night to attend the event.

Including Chu, five Nobel Laureates attended the gala. The others were: Nicolaas Bloembergen, Roy J. Glauber, John Hall and William Phillips–all of whom either helped to develop lasers or used them in their research. During his talk to the gala’s attendees, Chu pointed out that 12 Nobel Prizes in the last 50 years featured a laser in an important way.

For the kickoff event, the museum’s Flag Hall was transformed into a blue-and-white LaserFest extravaganza.

A giant LaserFest logo was projected onto the wall above the hall’s newly installed sculpture of Old Glory. Also featured in the center of the floor, was a 3-foot-tall silver and red cake sculpture in the shape of Theodore Maiman’s original ruby laser.

To keep the laser celebration going, the museum will feature a display case on its first floor containing artifacts that trace the history of laser innovations and applications.
Brent Glass, the museum’s director, said there are more than 300 items in the museum’s laser collection. By all accounts, everyone had a good time at the gala.

“It was terrific. Everyone came out in the elements and celebrated the 50th anniversary and had a fun time,” said Barbara Hutchison, LaserFest project manager at OSA. Added James Roche, LaserFest coordinator at APS, “Everyone enjoyed the reception. Steven Chu is a fantastic speaker.”