A Fond Farewell
On September 13, APS hosted a reception on Capitol Hill in honor of the retiring Chairman of the House Science Committee, Sherwood Boehlert (R-NY).

Industrialists, educators gather in DC for NAS convocation
Representatives from industry, K-12 education and higher education gathered at the National Academy of Sciences in Washington to attend a convocation marking the one-year anniversary of tthe benchmark NAS report, Rising Above the Gathering Storm: Energizing and Employing America for a Brighter Economic Future.

Members in the Media
As quoted in other publications...

Glad You Asked That
Ever wonder why there seem to be more home runs at Coors Field in Denver, Colorado, than at other major ball parks?

Jeff Francis and the physics of baseball
The Magnus force has made Jeff Francis what he is today: a 25-year-old left-handed pitcher on the rise in his second full season with Major League Baseball's Colorado Rockies 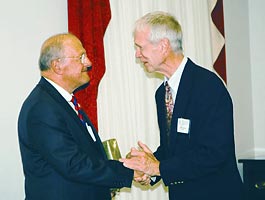