Architect of the Standard Model dies at 88.

Steven Weinberg, a theorist who unified two fundamental forces and shaped the way physicists and the public thought about the universe, died July 23 in Austin at 88.

Weinberg shared the 1979 Nobel Prize in Physics with Abdus Salam and Sheldon Glashow for contributions to the theory that unified the weak and electromagnetic forces. He continued to win academic honors and awards for the next half century, including the 2020 Breakthrough Prize. In addition to his academic research, Weinberg wrote prolifically about science in popular books and publications such as the New York Review of Books. He was also a Fellow of APS.

“Steve was one of the last figures from this heroic era of particle physics that culminated in the development of the Standard Model,” said Scott Aaronson, a theoretical computer scientist at the University of Texas at Austin, where Weinberg was a professor for forty years.

If he achieved mythic status through physics, it was from humble beginnings. Steven Weinberg was born in New York City to Frederick and Eva Weinberg, a court stenographer and homemaker respectively. Weinberg’s interest in science was cultivated at the Bronx High School of Science, where he was—famously—classmates with Glashow, who would also go on to attend Cornell. 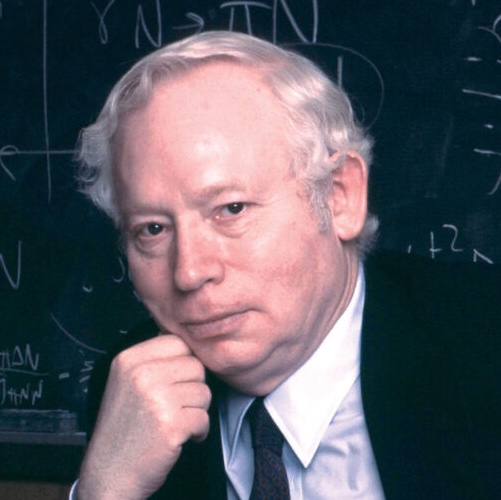 After Cornell, Weinberg married Louise Goldwasser, and the newlyweds spent a year in Copenhagen. He then went back to America and finished his PhD with Sam Treiman at Princeton on weak decays and renormalization, the mathematical technique for wrangling annoying infinities. Over the next decade, he bounced from Columbia to Berkeley before landing in Cambridge, MA, where he held appointments at MIT and Harvard.

In the early 1960s, Glashow and Salam attempted to unify electromagnetism and the weak force by proposing massive W and Z bosons as force carriers. But giving the W and Z mass made the theory nonrenormalizable. Weinberg took the idea of spontaneous symmetry breaking and in three brisk pages showed how the mechanism could lead the W and Z to appear massive at lower energies. One of the most impactful papers in particle physics, “A Model of Leptons” went mostly unnoticed: for two years after it was published in Physical Review Letters, it garnered only two citations.

“Why doesn't anybody quote his paper between 1967 and 1970? The reason is nobody could do that calculation,” said Helen Quinn, a professor emerita at SLAC. Weinberg knew that his model was “probably renormalizable,” but it wasn’t until a 1970 paper by Gerard t’Hooft that the dam burst and citations flooded in. When Quinn and her coauthors did the first one-loop calculation for Weinberg’s theory, “he was so happy he invited us to sherry at his house,” she said.

As a theorist, Weinberg was not particularly focused on model building. “It is ironic that his Nobel Prize was for a specific model, because he was really interested in the general picture and not in the specific models, no matter how beautiful,” Howard Georgi, a Harvard physicist, wrote in an email to APS News.

“He told me why once: Models are almost always wrong. But if you have general arguments that follow from general principles, that has a chance of being correct in the long run,” said John Preskill, a physicist at Caltech and one of Weinberg’s students.

Some of Weinberg’s colleagues argue that his real seminal contribution to particle physics was not electroweak unification but articulating how to think about effective quantum field theories (EQFTs). Though EQFTs had been in use for decades, Weinberg’s insight was that physics lurking at much higher energies would appear in terms suppressed by heavy masses. This perspective shaped the hunt for unknown particles and “underlies almost everything we do from LHC physics to string theory to dark matter,” Georgi wrote.

Beyond particle physics, Weinberg also made contributions to astrophysics and cosmology, in particular by reintroducing the cosmological constant as a problem—prior to the discovery of dark energy—and working on matter-antimatter asymmetry in the early universe. He expounded on his view that the very small and very large were connected in The First Three Minutes, a popular science text, which both introduced the public to cosmic microwave background radiation for the first time and inspired a generation of practicing physicists to hone their cosmological queries.

In 1981, Weinberg followed his wife Louise to UT Austin, where she was already a professor at the law school. He established a theoretical physics department where his Tuesday pre-colloquium lunches became de rigeur. “The discussion was basically led by him,” said Willy Fischler, a theorist at UT Austin. “Often, it was about history, poetry, and literature.”

Despite his laurels and seniority, Weinberg continued teaching. This fall, he was set to teach a course on thermodynamics and statistical mechanics. “I was amazed. I mean Steve is 88, and he's going to teach a course that he has never taught,” said Fischler.

Colleagues noted Weinberg’s intensity and testified to his single-mindedness when attacking a physics problem. “He wasn't going to come to your office and say, ‘How are you doing? How was your weekend?’ He wasn't that kind of person,” said Sonia Paban, a theoretical physicist at UT Austin.

Weinberg was known for his solitary style, and he was frequently a sole author. When working from home, Weinberg kept a TV on his desk and enjoyed listening to old movies in the background to feel less isolated. But earlier in his career, Weinberg frequently collaborated with physicists like Quinn, Glashow, and Benjamin Lee.

When Quinn and Roberto Peccei published their approach to the strong CP problem, they did not predict an axion. “Weinberg actually called me up and asked me, ‘Did you notice that your theory has this property that there's a pseudo-Goldstone boson?’ And I said, ‘Well, no, I didn't. But you're absolutely right. Obviously, it does.’ And he said, ‘Well, in that case, I'll publish it myself.’” Quinn said. “So what he was doing was giving me the opportunity to be a co-author of the paper with the axion.”

Others also spoke to Weinberg’s sense of fairness. Paban recalls an incident when a visiting Nobel laureate dismissed a question by a student during a colloquium. “The speaker looked at [the student] and said, ‘I see you don't understand’ and he proceeded,” she said. “Steve raised his hand and said, ‘I don't understand that—and don't give me that answer.’”

For Weinberg, the pursuit of understanding was not an idle matter. “Our mistake is not that we take our theories too seriously, but that we do not take them seriously enough,” he wrote in The First Three Minutes.

“Steve said, ‘I think we don't take our theories seriously enough, because it's so hard to believe that the squiggles that you make on a piece of paper are actually the way nature works.’” Preskill said. “In his case, and in a few spectacular examples, they were indeed.”