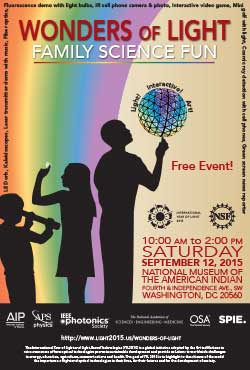 A celebration of light is coming to our nation's capital, this Saturday, September 12. "Wonders of Light: Family Science Fun," a free public science festival, will take place between 10 a.m. and 3 p.m. at the Smithsonian National Museum of the American Indian in Washington, D.C. The educational event will offer hands-on activities including an interactive video game, build-your-own kaleidoscopes, and a glowing LED orb that changes colors in response to music. The event is part of the International Year of Light and Light-based Technologies, a yearlong celebration proclaimed by the United Nations.

The festival aims to help the public gain a better understanding of light and to learn about the exciting research going on in optics, photonics, and other light-related sciences, says Rebecca Thompson, APS Head of Public Outreach. "I think people don't realize how much we're still learning about these things." Many of the presenters are practicing researchers, so students will have the chance to chat with real scientists.

Following the science fest, a symposium will feature Nobel Prize-winning scientists in an event entitled "Light for a Better World: A Celebration of U.S. Innovation," from 6 to 9 p.m. at the National Academy of Sciences. Participants in the symposium include Nobel Laureates Eric Betzig of Howard Hughes Medical Institute and Shuji Nakamura of University of California Santa Barbara, France Córdova, director of the National Science Foundation (NSF), Gerald Duffy of GE, and Michael Liehr of AIM Photonics.

A group of scientific organizations joined forces to put on the show, including the NSF, APS, the American Institute of Physics, the IEEE Photonics Society, the National Academy of Sciences, the Optical Society, and the International Society for Optics and Photonics.

Light for a Better World: A Celebration of US Innovation (IYL 2015)