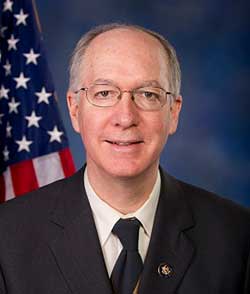 On Tuesday, Representative Bill Foster (IL-11) declared his support for the Iran nuclear agreement. Foster, the only physicist in Congress, announced his position in a news conference that also included statements from Secretary of Energy Ernest Moniz and physicist Richard Garwin, an arms control expert who worked on the design of the first hydrogen bomb.

"As the only physicist remaining in Congress — in fact, the only Ph.D. scientist of any kind — I have felt a special responsibility to perform due diligence on the technical components of the proposed nuclear agreement," Foster said.

Foster, a Democrat and former particle physicist at Fermilab, had been undecided on the agreement before Tuesday, and his decision came only after thorough scrutiny, he said. He estimated that he received 15 briefings on the matter, and he spoke in detail with experts at Argonne National Lab and other US National Labs.

"I do believe that voting for this deal will make it less likely that Iran will develop nuclear weapons," Foster said. "And voting against this deal, with no better options in sight, makes the potential for Iran to develop a nuclear weapon more likely."

Foster noted that he devoted a great deal of effort to investigating the Obama Administration's claim of a 1-year breakout time for Iran to produce a nuclear weapon under the deal, and that he agrees with that assessment.

Opponents of the agreement in Congress have drafted a resolution of disapproval that would block the deal, but enough senators have now pledged their support that the deal is expected to survive congressional opposition.

Moniz thanked Foster for his diligence in digging into the science behind the agreement. "The more that is understood about the scientific underpinnings of the agreement, the more confidence there will be that this is accomplishing its goal," said Moniz.

Garwin, who along with 28 other scientists signed a letter to President Obama praising the agreement this past August, also spoke in its favor, calling it "an excellent deal."

Foster and Garwin also emphasized the importance of strengthening the Nuclear Nonproliferation Treaty, which applies to 191 states around the globe. "[T]his is not the end, but just the beginning of our work," Foster said.