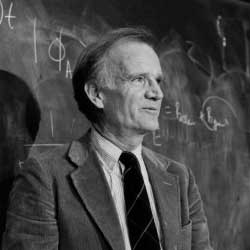 Val Fitch, professor of physics at Princeton University and co-discoverer of charge-parity (CP) symmetry violation, died on February 5, 2015, at his home in New Jersey. Fitch, 91, was awarded the 1980 Nobel Prize in Physics along with his colleague James Cronin for “the discovery of violations of fundamental symmetry principles in the decay of neutral K-mesons." The results constituted a major contribution to the standard model of particle physics. Fitch was a Fellow of the American Physical Society, and was the last member to serve two consecutive terms as APS President (in 1987 and 1988).

The CP symmetry rule states that if a particle were reborn with opposite charge (C) and parity (P) reversed (that is, its mirror reflection) then its physical behavior would be identical. The violation of this symmetry is a necessary condition to explain why there is more matter than antimatter in the universe, despite their being created in equal amounts at the big bang.

In 1964, Fitch and Cronin led an experiment at Brookhaven National Laboratory that demonstrated that CP is violated in so-called weak interactions, in particular in the decays of K-mesons (kaons). They detected the decay of the long-lived neutral K-meson into two charged pions, a process forbidden if the symmetry were exact. Although it took several more decades, later experiments observed further examples of CP violation in K decays, and also CP violation in other particle decays, in particular the decay of B-mesons.

Fitch was born on March 10, 1923, in Merriman, Nebraska, and was drafted into the US Army in 1943. He participated in the Manhattan Project at Los Alamos, and following World War II, obtained his Ph.D. in nuclear physics at Columbia University in 1954. He moved to Princeton University in the same year, where he began collaborating with James Cronin on the research that led to their Nobel Prizes.

The Fitch-Cronin experiment is a classic example of how an unexpected experimental result can overturn conventional wisdom, leading to profound rethinking of fundamental principles. In this, it was similar to the discovery of the Cosmic Microwave Background by Penzias and Wilson that took place at roughly the same time.