Joan Feynman, an astrophysicist known for her discovery of the origin of auroras, died on July 21. She was 93.

Over the course of her career, Feynman made many breakthroughs in furthering the understanding of solar wind and its interaction with the Earth’s magnetosphere, a region in space where the planetary magnetic field deflects charged particles from the sun. As author or co-author of more than 185 papers, Feynman’s research accomplishments range from discovering the shape of the Earth’s magnetosphere and identifying the origin of auroras to creating statistical models to predict the number of high-energy particles that would collide with spacecraft over time. In 1974, she would become the first woman ever elected as an officer of the American Geophysical Union, and in 2000 she was awarded NASA’s Exceptional Scientific Achievement Medal.

Feynman’s choice in pursuing a career as a scientist was often at odds with the expectations for women, especially the expectations for a wife and mother, but she persisted to become an accomplished astrophysicist. During the 2018 APS April Meeting, where Feynman spoke at the Kavli Foundation Plenary Session, she recalled her mother discouraging her childhood interest in science, calling “women’s brains too feeble,” likely a common belief at the time.

"Joan Feynman made important contributions to physics," said APS President Philip Bucksbaum. "Her work on solar wind and the earth’s magnetosphere led to the discovery of the cause of auroras. She also developed a method to predict sunspot cycles. Her efforts in the geophysics community for fair treatment of women, together with her own example as a leader in solar physics, helped to change society’s attitudes in the mid-20th century about the contributions that women can make in physics." 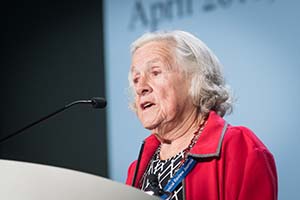 Born in 1927, Feynman grew up in Queens, New York, alongside her older brother Richard, nine years her senior, who would eventually become one of the world’s most well-known physicists. He would become Joan's first teacher and someone who fostered her inquisitive nature, believing her capable of learning all the math and science he could teach her. In her 2018 talk, Feynman recounted early memories of solving math problems for the unique reward of getting to pull her brother’s hair and serving as his "lab assistant" at the age of five. A late-night trip to the golf course near the Feynman family home to see an aurora inspired Feynman’s curiosity and would eventually guide her research.

For her fourteenth birthday, Richard gave Feynman a copy of Astronomy by Robert Horace Baker, a college-level physics text, that both taught her about physics and what was possible: Feynman credited a figure attributed to Cecilia Payne-Gaposchkin for proving to her that women could indeed have a career doing science.

Feynman would go on to receive a bachelor’s degree from Oberlin College, and she attended Syracuse University, studying condensed matter theory and earning a PhD in 1958. By 1960, Feynman was married with two children and, having not secured the kind of research position she was looking for, she decided to take a break from physics to take on the role of homemaker.

The break was short-lived, as Feynman grew depressed from the drudgery of keeping a home and caring for two small children: In 1962, at the advice of a therapist, she went in search of employment, securing three job offers at Columbia University’s Lamont-Doherty Earth Observatory. At Lamont, where she worked part-time, Feynman began her research into Earth’s magnetosphere, identifying its shape.

In 1971, Feynman accepted a job at the NASA Ames Research Center, where she developed a way to detect solar coronal mass ejections from the sun by searching for the presence of helium in solar wind. She would go on to hold positions at the High Altitude Observatory at the National Center for Atmospheric Research in Boulder, Colorado; the National Science Foundation; and Boston College. In 1985, Feynman accepted a position at the Jet Propulsion Laboratory (JPL) in Pasadena, California, where she would conduct research until her retirement.

As part of her research at JPL, Feynman identified the mechanism that leads to the formation of auroras and developed a statistical model to determine the number of high-energy particles expelled from coronal mass injections that would hit a spacecraft during its lifetime. After her retirement from a senior scientist position in 2003, Feynman continued to conduct research on the impact of solar activity on the early climate of the Earth and the role of climate stabilization in the development of agriculture.

"Joan Feynman leaves a legacy of exemplary scientific research, having made important contributions to our understanding of the solar wind, the earth’s magnetosphere, and the origin of auroras," said APS CEO Kate Kirby. "Despite being discouraged to pursue science by women in her family, she persevered, and her accomplishments serve as an inspiration to women who wish to pursue a career in science."