The Implications of a Clumpy Universe

While much is known about the expansion of the universe, until recently the basis of our understanding has relied on approximations: In order to solve the equations of Einstein’s general theory of relativity, researchers have had to assume that matter is uniformly distributed across space. In reality, the universe’s clusters of galaxies and stars form pools of densely packed matter, creating inhomogeneous clumps.

The reason for the approximation has been the extreme difficulty of doing the full calculations, even with the best supercomputers. Recently, two independent groups decided to break this tradition — modeling the inhomogeneous universe in extraordinary detail.

And the results are robust. The two teams started with different initial conditions, and focused on different aspects of the early evolution of the universe: Starkman and his team concentrated on how the overall expansion was affected by the pooling of dense matter — while Bruni and Bentivegna studied the local expansion rates around under- and over-dense areas of the simulations.

Both teams found localized differences in evolution and expansion rates compared to conventional general relativistic simulations, but it remains to be seen whether the teams’ techniques will be adopted over the conventional approach. In future work, the teams hope to produce quantifiable results that astronomers can apply in their own work — for example, on how photons and the propagation of light respond to curvature of an inhomogeneous universe.

While the current model of cosmology still holds, the bigger question is to see if other groups can determine whether the pooling of dense matter, and the consequential forming galaxies and stars, have a larger effect on the expansion of the universe. 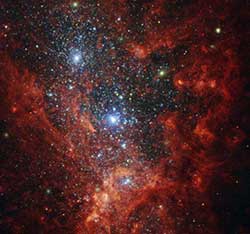 Solving the equations of general relativity assuming a clumpy universe is hard, but may give more insight into the expansion of the universe.