Nicholaas Bloembergen, winner of the 1981 Nobel Prize in Physics and Professor of Optical Sciences at the University of Arizona, died at his home in Tucson on September 5 at the age of 97. He was awarded the APS Oliver E. Buckley Condensed Matter Physics Prize in 1958, and was widely recognized for his work in spectroscopy and nonlinear optics, receiving the U.S. National Medal of Science in 1974. He was a Fellow of the APS and served as APS President in 1991. 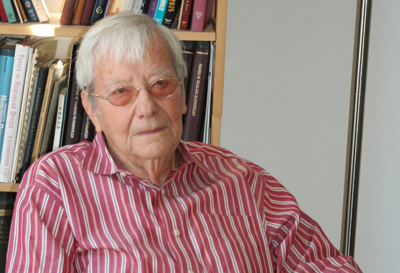 "It is almost impossible to think of an area of physics or applied science that was not profoundly impacted by Nicholaas Bloembergen’s research," said Pierre Meystre, who was one of his colleagues at the University of Arizona. "His wealth of pioneering contributions have provided us with extraordinary new tools and opened up vast new directions of inquiry."

Bloembergen was born in Dordrecht, Netherlands, in 1920. He started his physics education at the University of Utrecht in 1938 and graduated just before the Nazi occupation closed the university in 1943. After World War II he worked as a research assistant at Harvard University but returned to the Netherlands and completed his Ph.D. in 1947 at the University of Leiden. He joined the faculty of Harvard University as an associate professor in 1951 and remained there until 1990, when he became professor emeritus.

Stephen Harris of Stanford University cites the microwave solid state maser as a key contribution, and quotes from an Optical Society oral history interview with physicist Anthony Siegman: "Now, 1956 is the year that a man at Harvard named Nico Bloembergen … comes up with the idea of the so-called microwave solid state maser. And he writes a classic short paper … which just absolutely tells how to make a realistic microwave maser amplifier and presents a very clear analysis … And in my view, at least, Bloembergen’s invention was the development that broke open ultimately four years later the advent of the laser itself." Adds Harris: "Nico was a wonderfully kind man as well as a once in a century scientist."

As masers and lasers were further developed in the 1960s Bloembergen became a leader in the growing field of quantum electronics. "Soon after the ruby laser was invented and optical second harmonic generation was observed, he wrote an article with Armstrong, Ducuing and Pershan on the interaction between light waves in a nonlinear dielectric in 1962 and later the first book on nonlinear optics in 1965," notes Shen. "He is generally regarded as the founder of nonlinear optics. He was extremely knowledgeable and was a most respected physicist."

"Nico was a pioneer in unraveling the mysteries of the emerging field of nonlinear optics," adds Roger Falcone at the University of California, Berkeley, and 2017 APS President-Elect. "I well remember his talks, which were filled with the complex mathematics of multiple terms in relevant equations, and whose consequences he then conveyed to audiences full of rapt scientists and engineers who were the early laser aficionados."

But Bloembergen was modest in an interview with a Dutch newspaper. "In fact, what we did was quite simple. We took a standard textbook on optics and for each section we asked ourselves what would happen if the intensity was to become very high. We were almost certain that we were bound to encounter an entirely new type of physics within that domain."

His contributions also extended to applying science to policy matters. In 1987, APS released a report from its Study Group on the Science and Technology of Directed Energy Weapons, which was co-chaired by Bloembergen and C. Kumar N. Patel of Bell Laboratories [3]. The study came at a time when the administration of U.S. President Ronald Reagan was strongly campaigning for its Strategic Defense Initiative, popularly called "Star Wars" because of its reliance on laser and other beam weapons to knock out ballistic missiles. The report concluded that at least ten years of research would be needed even to determine the feasibility of SDI.

"Nico Bloembergen was a great friend and colleague to many of us in the laser physics community, and we are saddened by his passing," says Philip Bucksbaum of Stanford University. "Many of us feel that his towering achievement was the development of nonlinear optics immediately upon its discovery by Peter Franken's University of Michigan group in the early 1960s. One of the last times I heard Nico speak was a few years ago at a celebration of the 50th anniversary of that original Franken paper in Ann Arbor, where the physicists active in those events came together to recall the genuine excitement of discovery at the dawn of laser science. The community will miss Nico, but the science he founded lives on as his lasting legacy."