Get Ready for the APS March Meeting 2023

In Las Vegas or online, engage with peers from across the globe. 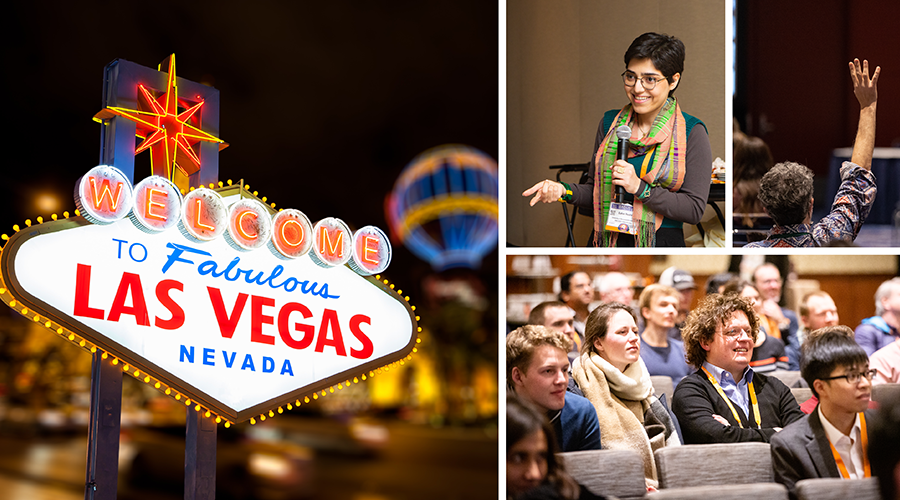 March is nearly here — and so is the APS March Meeting 2023. The March Meeting is the largest annual gathering of physicists, bringing together people from around the world. Participants can attend the in-person event in Las Vegas from March 5-10, or join the virtual meeting, scheduled March 20-22, from the comfort of home, office, lab, or space station. Attendees can also participate in both.

For the in-person event, core meeting activities will take place in Caesar’s Forum, a new smoke-free, casino-free convention center. All talks scheduled for Las Vegas will be given in-person, and then recorded and uploaded to the virtual meeting platform about a week later for post-meeting access. All in-person attendees will have access to the virtual meeting platform. APS encourages Las Vegas attendees to book their rooms in the APS hotel block by Friday, Feb. 3.

The Society hasn’t held a major meeting in Las Vegas since 1986, when 4,000 physicists flocked to the iconic MGM Grand Hotel. Allegedly, the casinos suffered one of their worst weekends ever; the physicists avoided gambling like the plague, instead cramming into conference talks, according to Quartz. In a cheeky 2013 Letter to the Editor of APS News, Marvin Cohen of Berkeley, California, wrote that one casino manager reportedly said of the 1986 meeting attendees, “They came with a single twenty dollar bill and one shirt, and they changed neither.”

Past March Meeting chair David Campbell says physicists have a long history of trying to beat the odds in Las Vegas. In the 1970s, several doctoral students from the University of California, Santa Cruz, applied chaos theory to roulette, using a computer embedded in a shoe. The group scored a 44% advantage over the casino — odds that a typical gambler never sees.

The in-person March Meeting will feature thousands of talks, as well as vibrant special sessions, including prize sessions and events inspired by the 2022 Nobel Prize in Physics. And this year’s Kavli symposium, scheduled for March 5, is called “Frontier Physics from the Atomic to Astronomical Scales.”

In-person attendees can also plan to connect with the vibrant host city, says Smitha Vishveshwara, chair of this year’s March Meeting. The planning team is collaborating with physicist and circus performer Julia Ruth, a Vegas local, to showcase the area’s performance artists at several meeting events. Like performance artists, Vishveshwara says, physicists use “creativity and rigor to discover and bring to life worlds that beguile the imagination.”

Attendees of this year’s virtual March Meeting won’t square off with casino house odds, but they’ll have access to excellent online events, including live keynote talks and poster slams, as well as live presentations drawn from abstracts not presented in Las Vegas. Virtual attendees will be able to submit questions in real time to presenters, both at talks and poster slams. Meanwhile, exhibitors will offer live workshops online, and attendees will be able to message companies and request private meetings.

Every March Meeting 2023 attendee — virtual and in-person — will have unlimited access to recorded talks and all ePosters via the virtual meeting platform until late June.

This year’s dual format was recommended by the APS Committee on Scientific Meetings, which collected feedback after last year’s hybrid March Meeting. “Our physics community, and the entire world, is still trying to find its feet in this post-pandemic world,” says Vishveshwara. “Patience and adaptability, along with our colossal planning efforts, will tell us what format works best.”

APS has also rolled out a new, tiered registration fee structure for the March Meeting and April Meeting, with the goal of reducing the financial barrier to attendance that affects many physicists and students around the world.

APS encourages attendees to review the meeting’s COVID-19 information and Code of Conduct. Learn more about March Meeting 2023 at march.aps.org.