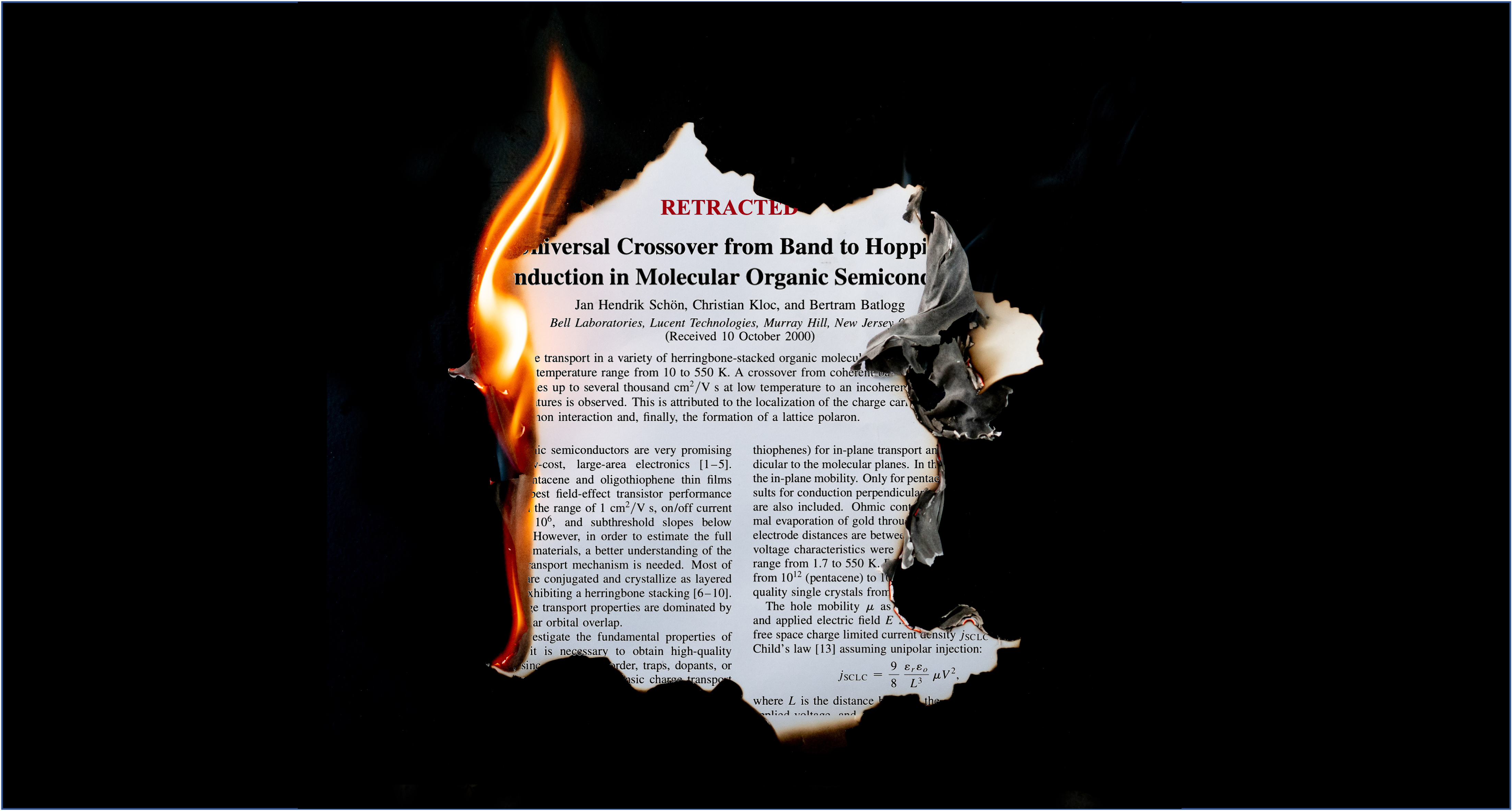 In an age of p-hacking, paper mills, and predatory journals, it isn’t hard to spot unsavory behavior in science. But prolonged scientific fraud masquerading as groundbreaking discovery is mercifully rarer. Twenty years ago, a condensed matter physicist at Bell Labs shook the scientific world when his years-long work was revealed as a forgery.

On September 26, 2002, an investigatory committee released a report concluding that Jan Hendrik Schön—and none of his coauthors—committed scientific misconduct in at least 16 cases.

“The works in question report accomplishments that, if valid, would represent a remarkable number of major breakthroughs in condensed-matter physics and solid-state devices,” the committee stated. Led by Malcolm “Mac” Beasley, an eminent Stanford condensed matter physicist (and later, 2014 APS President), the Schön report came after months of community skepticism. It closed the book on Schön and his fraud, but fallout from the scandal lingers today.

“Even when compared to other cases of scientific misconduct, Schön’s case was uniquely large in scale,” Eugenie Reich writes in Plastic Fantastic: How the Biggest Fraud in Physics Shook the Scientific World. “It was unprecedented in terms of the number of discoveries he faked and the number of other scientists he misled or deceived.”

In response, APS established guidelines for coauthor responsibility based on the report’s recommendations. Debate still smolders about whether the scandal reflected the success of science’s self-correction or the failure of its institutions.

Schön was born in 1970 in Verden an der Aller, a town in northwest Germany, and raised by his mother and stepfather near the Austrian Alps. He studied physics at the University of Konstanz, where, in Reich’s reporting, the seed of Schön’s misconduct was planted: He began to smooth data in order to align his results with the accepted values. Still, colleagues reflected that, at the time, he was an “honest and proper person” who was technically skilled and careful about data collection.

When Schön arrived at Bell Labs in the late 1990s, the storied research facility was experiencing a bit of a renaissance. Though the glory days of the transistor and laser were behind it, Bell was benefiting from the dot-com boom, and for three years in a row, its past or present researchers won part of the Nobel Prize in Physics. The desire to publish high-impact research was very much alive.

Schön’s first experiments at Bell centered around transforming organic crystals of alpha-sexithiophene into transistors. He diligently measured the current of circuits attached to the crystal, but recorded them on scraps of paper, which he later threw away—a shoddy record-keeping practice that would aid Schön in his deception. Faced with underwhelming results, Schön began to manipulate data, tugging the curve of a plot to give the impression of much higher current. With the new data, Schön attracted the attention of journal editors much more easily.

The mobility of organic crystals—essentially a measure of how freely electrons move around—is comparatively low because electrons get caught in molecular nooks and crannies. But as Reich reports, Schön began to measure astonishingly high mobilities. At the end of 1999, Schön parlayed these advances, spending a full night “discovering” the fractional quantum Hall effect in an organic crystal. From there, the fabricated breakthroughs continued. Schön developed organic single-molecule transistors, lasers from organic crystals, and superconductivity in plastics like polythiophene.

The research enthralled scientists and industry alike. If organic crystals could exhibit properties like superconductivity, they could replace traditional inorganic silicon chips and revolutionize electronics.

By 2001, Schön was publishing a paper every eight days—but skepticism was growing. “Our devices just didn't act like their devices,” says Doug Natelson, a condensed matter physicist at Rice University. “You do this for a few months, and you start thinking, ‘I'm a neophyte at this, but, boy, it's really hard to see how you get there.’” Natelson, like others, tried and failed to replicate Schön’s purported observation of superconductivity in polythiophene.

By the time the 2002 APS March Meeting rolled around, allegations about issues with Schön’s data had reached a fevered pitch. In May of 2002, Bell Labs management formed a committee to investigate “the possibility of scientific misconduct, the validity of the data and whether or not proper scientific methodology was used in papers by Hendrik Schön, et al., that are being challenged in the scientific community.” The committee investigated 25 papers and three allegations: data substitution, unrealistically precise data, and data that violated the laws of nature.

Some of the data substitution was egregious. In a paper on polythiophene superconductivity, Schön’s measurements of resistivity were identical down to the smallest bumps from random noise—impossible if the data were real. When questioned by the committee, Schön had no excuse.

“He acknowledged that, yes, he had done those things,” Beasley says. “But he was firm to the end in a straightforward and unflinching way. He said, ‘What I presented represents the truth … and I made those changes to make it more beautiful.’” There is no small irony here, Beasley notes: in German, schön means nice, or beautiful.

Following the committee’s report, Schön was fired, his papers were retracted, and eventually, he lost his PhD.

Despite the potential consequences, large-scale scientific fraud occasionally rears its head. In July, an investigation by Science magazine alleged that a landmark 2006 study on Alzheimer’s disease, led by Sylvain Lesné, used doctored images. If the allegations prove true, Lesné’s fraud could have helped misdirect some Alzheimer’s research for years.

The latest news is a reminder for scientists to be vigilant against misconduct—especially when it aligns with their publication desires and scientific dreams.