Improving Global Science for the Benefit of Humanity

International scientific collaboration has faced many obstacles in the past several years, hindering our ability to respond to climate change, inequality, and other pressing issues. At this year’s APS Annual Leadership Meeting on January 27, a session called “Addressing Global Scientific Challenges” delved more into this nuanced topic, asking: How can scientists work together to identify and overcome challenges to global science?

“The challenges that science and scientists face today are indeed global. They are complex. They are existential and navigating towards solutions is no simple task,” said Miles O’Brien, a science and technology correspondent at PBS NewsHour, who moderated the session.

He began the discussion by asking William Collins, Director of the Climate and Ecosystem Division of Lawrence Berkeley National Laboratory and a member of the Intergovernmental Panel on Climate Change (IPCC), whether the problems science faces today are truly more difficult than those in the past. “The challenges have gotten greater, precisely because we’ve delayed trying to solve the problem,” Collins said. 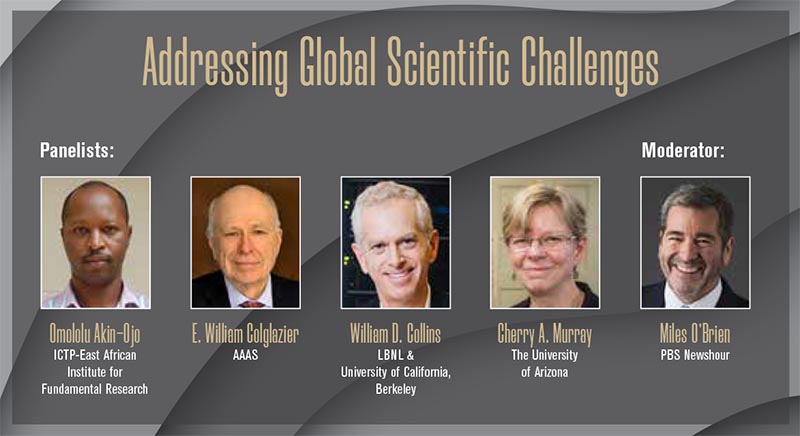 Director of Biosphere 2 Institute, Cherry Murray (University of Arizona) noted that today’s global problems of climate change, inequality, and so forth are inherently connected. “In order to do solutions, we need every nation in the world to work on these at the same time.”

Referencing inequality among nations, O’Brien then asked Omololu Akin-Ojo, founding director of the ICTP-East African Institute for Fundamental Research, how disparities impact the way global solutions help countries. Funding, building capacity, and digital connectivity are additional limitations when tackling problems in Africa, Akin-Ojo said. Murray added that scientific solutions that can meet present-day needs still do not reach people equally due to inequities coming from the scientific process itself. Solving such inequality must begin locally through education, she said. Seconding this, Akin-Ojo highlighted the value of starting education early and teaching critical thinking to train the next generation of researchers. In his center for learning, students are solving local problems concerning energy availability, which overlaps with climate research and underscores the interconnectedness of global solutions.

O’Brien asked Collins whether it feels frustrating to be met with minimal action from policy leaders when sharing urgent information on climate change.

“My takeaway from this is that we need to broaden the channels of communication, so just communicating with world governments is not enough anymore. We need a hearts and minds proposition that reaches out to the activists in the world—the younger people,” said Collins. The people who interact with the IPCC have not moved the needle significantly in 30 years, he added.

Such outreach must also highlight the economic benefits that good climate solutions can bring, said Murray. She emphasized that reduction of inequality and preservation of biodiversity were other outcomes with positive economic consequences that could come from international action on climate change.

The panel also discussed how to reconcile competition and collaboration in the scientific field and how to geopolitically enforce collaborative policies to stop climate change. O’Brien then asked panelists to explore how APS can have an impact facilitating such change.

“APS must look at these things holistically,” said Murray. APS can contribute to the resolution of interconnected global challenges by educating physicists to be broader in their thinking, she offered. APS could encourage the physics community to engage in transforming energy infrastructures and support cross-hemispheric scientific collaboration, Collins added. APS has a valuable role in lobbying the US government to advance scientific enterprise, said Editor-in-Chief of Science & Diplomacy William Colglazier (AAAS), mentioning APS’s various forums that inform its involvement on public and social issues. Accessibility of meetings through hybrid options like that at APS further scientists’ ability to connect globally, said Akin-Ojio. He added that APS can also work with the government to limit the difficulties associated with citizenship for international researchers applying to receive funding in the United States.

Wrapping up the session, O’Brien asked panelists to prioritize these suggestions. Motivating new students for physics-based solutions to the climate challenge, fostering international collaboration, and communicating solutions to policymakers were among Collins’ top picks. Murray included improving science education for all children. Colglazier also brought up continuing to internationalize with the global scientific hub and facilitating dialogues with other physics societies. Akin-Ojo said continuing to train young scientists in Africa and other countries as an investment in future generations.

APS CEO Jonathan Bagger concluded: “It is imperative that all physicists from all parts of the planet be engaged in developing solutions to challenges that are both local and global in nature. That means that physicists worldwide must not only have access to the latest scientific research but also to the larger scientific community to establish the collaborations and connections necessary to tackle these issues.”

The full recording of this session is available on YouTube.

The author is a science writer at the American Association for the Advancement of Science. She was previously an APS science communications intern.