January 7, 1939: The 83rd Anniversary of the Discovery of Francium

Francium barely exists. Only 30 grams of the element, atomic number 87, reside in the entirety of Earth’s crust, as estimates suggest.

It also ranks as perhaps the most deadbeat member of the first column of the periodic table, known as the alkali metals. Aside from francium, the alkali metals are among the most energetic workhorses of applied science. Lithium runs our batteries. Sodium tastes delicious. Potassium ions regulate our bodily functions. Rubidium atoms comprised the first Bose-Einstein condensate ever made. Cesium forms the heart of the atomic clock that standardizes the nation’s time.

But francium? It’s the indolent sibling that rarely shows up. The Royal Society of Chemistry puts it plainly: “Francium has no uses, having a half-life of only 22 minutes.”

Still, the backstory behind the element’s short résumé tells an intriguing story of the scientific process. Full of egos, red herrings, and even betrayal, the tale of its discovery also describes the triumph of a female scientist at a time when few women were allowed to enter the fray.

In the early twentieth century, scientists were in hot pursuit of a hypothetical element 87, then known as eka-cesium. The name came from the creator of the periodic table himself, Dmitri Mendeleev, who believed it should exist because of known heavier elements, such as uranium, at atomic number 92. “Eka-cesium”, where “eka” was a prefix for “one” derived from Sanskrit, was Mendeleev’s way of saying that the element should chemically resemble cesium, right above it in the periodic table.

Following Mendeleev’s prediction, a string of scientists began laying claim to the element. In 1925, Soviet chemist Dmitry Dobroserdov said he’d found element 87 in a sample of radioactive potassium. Naming it after his homeland of Russia, he called the substance russium, later found to be potassium-40. In 1932, US physicist Fred Allison claimed to discover six different isotopes of element 87, which he dubbed “virginium” after his home state of Virginia. Researchers later debunked Allison’s entire technique, with Nobel laureate Irving Langmuir famously condemning Allison’s work as an example of “pathological science.” In 1936, the physicist Horia Hulubei found a stable isotope he believed to be element 87. Hulubei named his discovery moldavium after the province of Moldavia in his native Romania. Moldavium would become a point of contention.

Ultimately, a Frenchwoman named Marguerite Perey would be the one to christen the element after her motherland.

In 1938, at 29 years old, Perey had worked at the Institut du Radium in Paris for ten years. She began her career there as Marie Curie’s personal assistant, having landed the job because of her standing as the top student at a women’s vocational school for chemistry technicians. The youngest of five children, Perey gave up her dreams of attending medical school for this path in response to her father’s death, which left her family in financial hardship when she was a child.

Researchers at the institute were studying actinium, a rare earth element discovered nearly four decades before. Scientists still knew little about it. The element presented experimental challenges because of its rarity: technicians at the institute recovered just one or two milligrams of actinium from ten tons of uranium ore. In addition, they had difficulty separating actinium from its chemically similar cousin, lanthanum. One of Perey’s routine tasks at the institute was to isolate actinium from ore. She mixed the ore with chemicals to form unwanted compounds, which she would then remove. 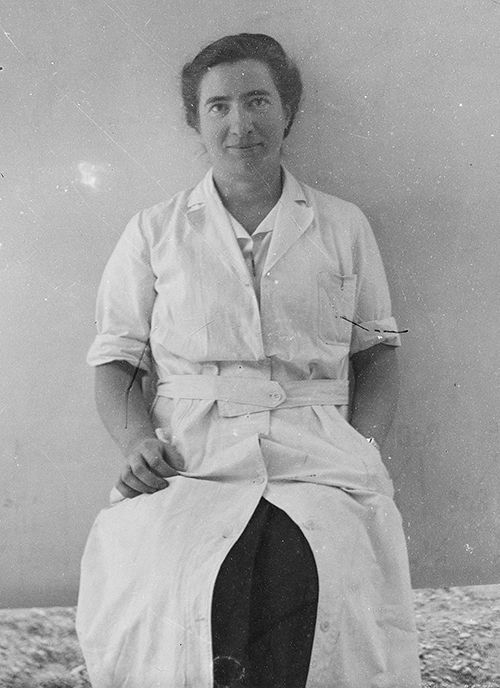 Shortly after Christmas in 1938, Perey discovered a curious signal when measuring beta emission from her samples. The radiation increased in the first 20 minutes or so, indicating that the actinium was decaying into a beta-emitting daughter. Perey suspected the emitter was element 87. She asked for a three-week leave to work on her ideas. Her supervisor, André Debierne—also the discoverer of actinium—initially refused her request. He eventually agreed, while expressing that he thought “the idea was stupid and would end in failure,” Perey recalled later.

Perey acted quickly. On January 7, 1939, mixing various chemicals, she found that the substance precipitated with cesium perchlorate. This indicated that the substance was chemically similar to cesium, an alkali metal. Connecting the dots, she concluded that she had found element 87, and that it had a half-life of 21 minutes. Following a naming convention for the decay products of radioactive elements, Perey named it Actinium K.

But the scientific establishment did not embrace her conclusion. Nobel laureate and physicist Jean Perrin, who presented her discovery two days later to the Académie des Sciences, did not stand behind her work. After a journalist reported Perey’s discovery, Perrin wrote to the newspaper that Hulubei, who worked in Perrin’s laboratory, had discovered element 87, and Perey’s Actinium K was merely an isotope of his stable moldavium.

The establishment did not recognize her discovery until 1946. (Researchers debunked moldavium after nuclear studies found that element 87 had no stable isotopes.) The International Committee for Nomenclature invited Perey to name the element. Her first suggestion was “catium,” referencing the word “cation,” but her superior, Irène Joliot-Curie, said it would evoke the word “cats” to English speakers. Perey chose “francium” instead, making it the second element after gallium to be named after France.

But Perrin’s sabotage, which led to years of skepticism from her peers, sullied Perey’s feelings of success. Recalling her discovery years later, she said, “Even if the period following my identification of francium brought certain honors, I also went through moments of tears and deceptions caused by vile traits of human character: manifestations of baseness and perfidy.”

In 1939, Perey didn’t even have the equivalent of a bachelor’s degree. Pursuing formal education after her discovery, she received her PhD in 1946 from the University of Paris. She continued to study francium and later became the head of nuclear chemistry at the University of Strasbourg in 1949. In 1962, she became the first woman elected to the French Académie des Sciences.

But Perey’s work took a toll: radiation exposure likely caused the bouts of illness she suffered throughout her life. It ultimately caused the bone cancer that took her life in 1975 at age 65.

It’s hard to overemphasize Perey’s meticulousness to successfully extract and characterize such tiny amounts of francium from ore. “She was brilliant,” says Luis Orozco, a University of Maryland physicist who conducts experiments with francium. “But it was not glamorous. It was systematic, rigorous work.”

Orozco creates francium synthetically in an accelerator. The isotope he currently works with has a half-life of about three minutes. Because of its ephemerality, his team rehearses their experiments with stabler rubidium atoms first. They work with one to ten million francium atoms at a time. More than that, and they run the risk of violating radiation safety requirements and have to evacuate the lab.

Researchers like Orozco study francium to probe fundamental science. Its heavy nucleus makes it a promising platform to study the weak nuclear force, says Orozco. In particular, he is working to measure electronic transitions in francium enabled by the electron’s interaction with the nucleus via the weak force. These transitions are an example of parity non-conservation, where the laws of physics differ between a system and its mirror reflection. He’s spent more than twenty years figuring out how to produce, trap, and manipulate the element. Other researchers have also proposed francium molecules as a candidate for studying time reversal symmetry, says Orozco.

After years of evolving monikers, francium may make a new name for itself.

G. Gwinner and L. A. Orozco, “Studies of the weak interaction in atomic systems: Towards measurements of atomic parity non-conservation in francium,” (Quantum Science and Technology, accepted Dec. 2021).