Neutron Lifetime Measurement Could Help Probes of the Standard Model

Nestled in the nucleus of a stable element, a neutron can live indefinitely. But released as a free particle, a neutron decays—according to the latest and most precise measurement—in 877.75 seconds.

The findings, reported in Physical Review Letters October 13 by the UCNτ Collaboration, more than doubles the precision of previous neutron lifetime searches to about a third of a second. Precise measurements of the free neutron lifetime can help physicists model element formation in the early universe. More broadly, beta decays have become an increasingly popular way to probe the Standard Model in recent years.

“Historically, beta decays were absolutely essential, because they gave us a hint about the structure of the Standard Model,” said Adam Falkowski, a theorist at the University of Paris-Saclay. In the 1930s, observations of missing momentum in beta decays allowed Wolfgang Pauli and Enrico Fermi to predict the existence of the neutrino.

Today, particle physicists use beta decays to check values of the CKM matrix—a key component of the Standard Model that governs quark flavor transitions. If free neutrons take too long to decay, the values of the CKM matrix would be off, suggesting new physics. While the latest UCNτ Collaboration results agree with the Standard Model, they only heighten a discrepancy among previous neutron lifetime measurements. Different methods of measuring the neutron lifetime consistently give different results: “beam” experiments find a neutron lifetime about 10 seconds longer than “bottle” experiments. 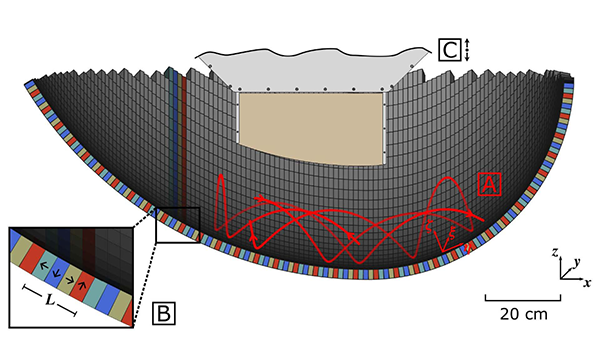 A simulated neutron trajectory inside the UCNtau trap. The inset shows the polarization of magnets in the Halbach array.

“One of my colleagues likes to say that the bottle experiment sounds easy and is hard, and the beam experiment sounds hard and is hard,” said Shannon Hoogerheide, a physicist at NIST who was not involved with the latest results. One of the main difficulties for both methods is producing large numbers of ultracold neutrons that have energies less than 200 neV.

Advancements in producing ultracold neutrons for the bottle method and several iterations of the experiment have pushed it to higher precision than the beam method. Falkowski said he places more value on bottle results because they agree better with the Standard Model and the experiments are more recent—the last beam measurements were taken almost two decades ago.

“At the moment, I think the most likely explanation is that this is just an experimental problem,” he said. “But if there is some other decay channel, for example, neutrons can decay to some exotic particles." Possible culprits include leptoquarks and Z’, which phenomenologists have also conjectured may be behind the b-decay anomalies and muon g-2.

More data are needed to resolve the tension between neutron lifetime measurements. Hoogerheide and her colleagues at NIST are redoing the beam experiment to corroborate the bottle results. 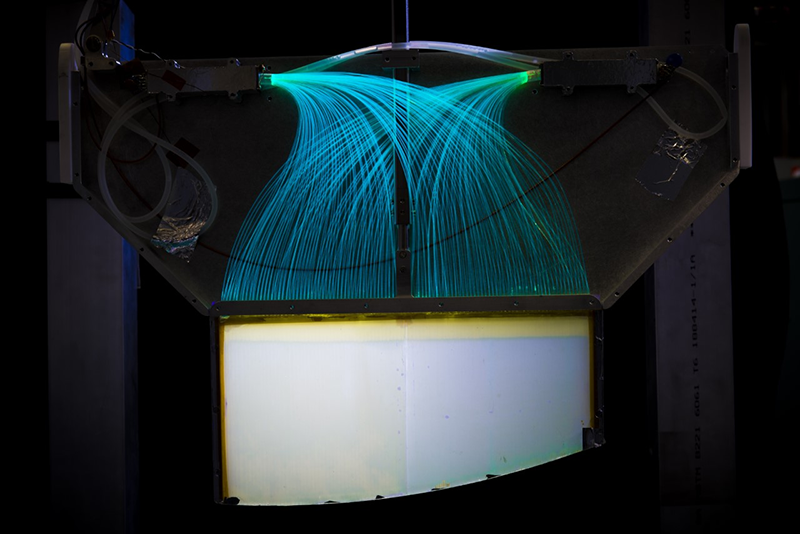 The main UCN detector in the UCNtau experiment.

Other techniques are also starting to enter the picture. At J-PARC, an experiment similar to the beam method detects decaying electrons instead of protons. The J-PARC measurement of the neutron lifetime is consistent with both beam and bottle methods because of large uncertainties, but the experiment could function as an independent check if it becomes more precise. Last year, a Johns Hopkins-led team used old data from NASA’s MESSENGER mission to Venus in another attempt to measure the neutron lifetime. By scanning detections of neutrons produced by cosmic rays, they were able to roughly estimate neutron lifetime to 780 seconds, with an uncertainty of about 130 seconds.

While Falkowski and other particle physicists admit they would prefer a new collider to check for physics beyond the Standard Model, neutron lifetime measurements are available here and now.

“I think when they started, it was more like, ‘this is something that we can measure,’” said Hoogerheide. “The lifetime discrepancy has been around for quite a long time, but interest has really ramped up more recently.”