December 1945: Introduction of the Atomic Energy Act of 1946

When the Second World War ended in the ashes of Hiroshima and Nagasaki, American scientists were confronted with the uneasy question they had been avoiding: Who would control the power to split the atom?

The Truman administration, senior scientists like Robert Oppenheimer, and the military had prepared an answer—they would. In October 1945, the May-Johnson bill was introduced in the House and Senate. The bill would have created a commission composed of military and civilian experts to control all forms of atomic energy. It would also have enforced strict secrecy measures on atomic knowledge with penalties of up to a decade imprisonment and $10,000 fines (roughly $150,000 today).

Scientists who worked on the Manhattan Project were aghast, and many physicists believed that the May-Johnson bill threatened their entire discipline. In response, the scientists organized a coordinated assault on the bill. That fall and winter, they engaged in an unprecedented public relations campaign and an extensive lobbying effort in Washington, DC. The scientists had three main arguments: control of atomic energy should be civilian, secrecy regulations would damage the work of science, and international control of atomic weapons was needed. They also hoped to educate the public about the nature of this new scientific frontier. The ideological goals of this “Scientists Movement” were summed up in a somewhat ambiguous slogan: NO SECRET; NO DEFENSE; WORLD CONTROL!

Histories of the movement have acknowledged how unusual it was. “It was the first large confrontation of scientists and politicians in American history, and perhaps the only sustained organized political activity by scientists as such in world history,” wrote the historian Donald Strickland in his 1968 monograph, Scientists in Politics. Contemporary scientists have become far more linked to politics through the government funding of research. Scientific communities have engaged in other political activities, from physicists lobbying against missile weapons programs to climate scientists testifying about the dangers of climate change, but the Scientists Movement was first and remains an outlier for its level of coordination and involvement. 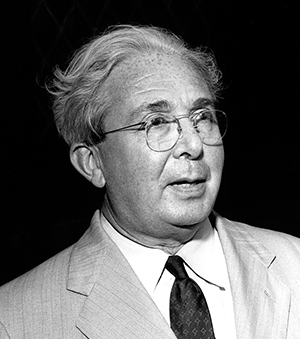 Leo Szilard advocated against the use of the atomic bomb and lobbied for the Atomic Energy Act of 1946. APS established an award in 1974 in remembrance of his advocacy.

The Scientists Movement didn’t come out of whole cloth; it was set in motion by a legacy of pre-war labor activism and wartime organization by the military. Like the rest of the country, American scientists were deeply impacted by the Great Depression. During the 1930s, they suffered severe unemployment and experienced disillusionment with capitalism.

In 1938, the American Association of Scientific Workers established its first chapter in Boston. Unlike its preexisting sister organization, the American Association for the Advancement of Science (AAAS), AASW was an explicitly political organization on the verge of a trade union. Its stated aim was “to promote and extend the applications of science and the scientific method to all problems of human welfare.” Early members included researchers with openly communist sympathies, including Oppenheimer. But when the Soviet Union signed a treaty with Nazi Germany and war loomed on the horizon for the US, the AASW splintered, and physicists—even some who had urged anti-capitalist pacifism—were drafted into military efforts, including the Manhattan Project.

Throughout the war, Manhattan Project scientists were integrated with the military in an unprecedented way. Researchers, used to the pursuit of esoteric knowledge, chafed under military control exemplified by General Leslie Groves, who they felt was an anti-intellectual authoritarian. An April memorandum by the eminent physicist James Franck captured concerns about secrecy regulations which would “become intolerable if a conflict is brought about between our conscience as citizens and human beings and our loyalty to the oath of secrecy.”

Additionally, by grouping scientists in labs—at Oak Ridge, Chicago, Hanford, and Los Alamos in particular—the military created a network of researchers who were connected like never before. With some exceptions, such as Leo Szilard’s petition against the use of the weapon, the atomic scientists initially supported the bombings of Hiroshima and Nagasaki. As Strickland put it, they reacted “first with elation and then with remorse, to the use of the bomb, and they felt it was their civic duty to educate the country.”

When the May-Johnson bill was introduced on October 3, 1945, the atomic scientists were primed to respond. Across the country, scientists at different labs were in contact. Scientists in Chicago sent telegrams to scientists in Los Alamos; researchers at Oak Ridge called researchers in New York. All were debating the new bill and the future of atomic energy. The fiercest debate was at Los Alamos, where there was a great deal of loyalty to Oppenheimer, who supported the bill. On October 16, Willy Higinbotham wrote to the Chicago group: “We are discussing the Johnson Bill for all we are worth. There is no unanimity of opinion here yet.” By the end of the month, the four main Manhattan Project sites had agreed to send representatives to Washington and meet with senators three times a week to explain “just what is at stake.”

A string of scientists thus came and went from Washington to wine and dine and win politicians to their cause. Their work paid off—before the end of November, Truman withdrew his support for the May-Johnson bill. They had also gained a powerful ally in Brien McMahon, an ambitious young senator from Connecticut.

On December 20,1945, McMahon introduced a new bill designed to prevent military control over atomic energy. The McMahon bill also included language supporting “the dissemination of scientific and technical information relating to atomic energy”—just the kind of reassurance scientists were looking for.

Though a spying incident in February caused some changes to secrecy provisions, and there were further attempts to push for military control, the McMahon bill eventually became the Atomic Energy Act of 1946. Through their concerted political activity, the physicists of the Manhattan Projects shaped the next half-century of science in government.

The author is a freelance science writer based in Bellport, New York. 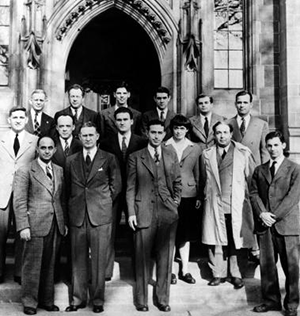 Members of Manhattan Project site at the University of Chicago, including Leo Szilard (first on the right, middle row).