Since the release of an APS Board Statement in February 2020, the Society has advocated for the federal government to take a balanced approach to address its concerns regarding research security and foreign influence. These efforts are paying off based on recent meetings with—and actions taken by—federal government officials.

APS strongly supports the open exchange of information and maintaining the United States as a destination of choice for global talent—both are essential to strengthening the US scientific enterprise. However, national security concerns, such as those expressed in a bipartisan 2019 Senate report, have led to federal policies that: restrict who can participate in certain areas of US-based research; limit US-based researchers ability to engage in international activities; and create a perception that the United States is unwelcoming to international students and scholars—all of which jeopardize the nation’s leadership in research and innovation.

“APS recognizes that there are legitimate national security risks involving the unauthorized transfer of US-based knowledge and technical expertise to other countries. We believe these threats are best addressed through a partnership between the federal government and the scientific community that is based on adhering to principles of openness and responsible stewardship,” said APS President Sylvester James Gates, Jr. “Moreover, the future of our research enterprise is at stake. The key to keeping it strong is to ensure that science remains open and that the US continues to attract highly talented international students.” 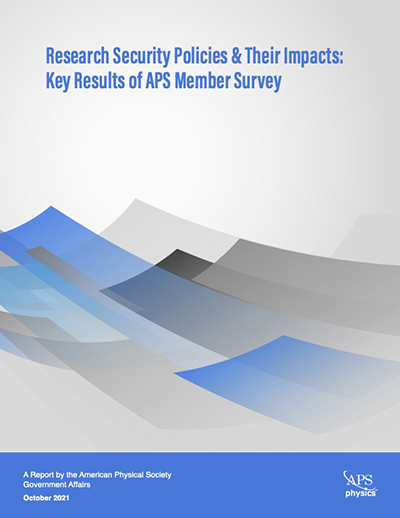 The US government’s current approach to addressing research security concerns is weakening, not strengthening, the US scientific enterprise, according to new data from an APS September 2021 survey of more than 3,200 physics professionals and students. The survey highlights the urgent need for a new approach that thoughtfully protects the nation against evident security risks, while also welcoming international talent and promoting beneficial international collaborations.

The report states that nearly one in five physics professionals (non-student APS members) in the United States have either chosen—or been directed—to withdraw from opportunities to engage in professional activities with colleagues based outside the United States due to current research security guidelines.

The APS survey data was included in the recent written testimony of Xiaoxing Xi, a physics professor at Temple University, who told the House Science Committee about his harrowing experience of being falsely accused of passing US trade secrets to China.

“Let me be clear: a policy that targets Chinese scientists and cracks down on openness in fundamental research does not protect America’s research security. It makes the US less competitive in innovation and less attractive to talents around the world. It threatens the US leadership in science and technology. It must stop,” stated Xi during his testimony.

APS is calling for a balanced approach to address research security concerns. Its 2020 Board Statement states that the US government should continue to abide by Presidential Directive NSDD-189, which notes that fundamental research should remain unrestricted “to the maximum extent possible.” The mechanism should be “classification,” if control of particular fundamental research is required for national security.

As for scientists, the statement calls for them to intensify their commitment to the elements of research integrity: objectivity, honesty, openness, accountability, fairness, disclosure, and stewardship. APS has also revised its ethics guidelines to enable the Society to address violations of research integrity by its members.

APS's efforts to persuade the federal government to move to a more balanced approach to addressing research security concerns are starting to have a positive effect.

For example, in a letter addressed to Biden Administration officials, Gates outlined a series of recommendations for adjusting the China Initiative—a targeted effort that is sowing fear among some APS members, restricting legitimate international scientific collaboration, and hindering the US in the race for global talent—that could both protect against national security risks and strengthen the US research enterprise. Following the letter, Society leaders and APS Government Affairs staff met with Department of Justice officials regarding the China Initiative and its potential reformulation.

Furthermore, during a recent meeting with the FBI, staff described the agency’s plans for a research security “pivot,” which involves a rebalancing of investigations where the FBI focuses on intentional, malign activity and federal agencies handle non-disclosure cases that are administrative or inadvertent in nature.

In addition, Secretary of State Antony Blinken signed a delegation of authority on August 25, 2021, stating that Chinese students could obtain a visa to study and conduct research in the United States if their entry is deemed “in the national interest.” The delegation of authority gives the US consulates abroad who provide visas the ability to make exceptions to Presidential Proclamation 10043, which bars Chinese students and scholars who allegedly have ties to China’s “military-civil fusion strategy” from studying and conducting research in the US. The Trump Administration issued the proclamation, which remains the current policy.

In addition to meeting with government officials, APS has held webinars addressing research security issues and convened a series of meetings between US physicists and their counterparts in China to discuss the concerns.

“Although our nations are competitors, we recognize the importance of coming together to support ethical conduct within science,” said Philip H. Bucksbaum, APS Past President.

APS leaders and Government Affairs staff remain buoyed by other productive meetings with the Department of Energy, State Department, and the Office of Science and Technology Policy.

“APS is encouraged by the conversations and the initial changes that are underway,” said Mark Elsesser, Director of Government Affairs. “We remain committed to working toward additional positive outcomes.”

Francis Slakey, APS Chief External Affairs Officer, said the Society will continue to focus on the federal government taking a balanced approach to research security because “science must remain open to the maximum extent possible in order to ensure that fundamental research can thrive—attracting international talent is key to making that happen.”