Helium-3 and helium-4 have the same charge, same valence electrons, and roughly the same mass—but in one way, they couldn’t be more different. Helium-4 a boson, following Bose-Einstein statistics; sans neutron, helium-3 is a fermion, obeying Fermi-Dirac statistics. For decades, it was unclear what phenomena the two would share in common. After superfluidity was observed in helium-4 in 1938, the mystery of whether helium-3 would display the same behavior would remain unsolved for nearly 35 years.

Pyotr Kapitsa, and separately, Don Misener and John Allen, were the first to observe superfluidity in helium-4. At 2.2 kelvin, the liquid helium suddenly began to behave strangely, flowing without apparent viscosity. The state reminded Kapitsa of a superconductor, so he dubbed it a “superfluid.” Theorists quickly connected some of the dots: liquid helium-4 was a Bose-Einstein condensate whose atoms congregated at a ground state, creating a viscosity-free flow.

Physicists wondered if helium-3 was also a superfluid, but the inquiry stalled until the Bardeen-Cooper-Schrieffer (BCS) theory of superconductivity was introduced in 1957. During the early 1960s, several groups of researchers proposed hypothetical superfluid states of helium-3 inspired by BCS theory. Lev Pitaevskii showed how Cooper pairs of helium-3 atoms would be substantially different from Cooper pairs of electrons. Then came two models—one by Philip Anderson and Pierre Morel and another by Roger Balian and N. Richard Werthamer (and independently by Yuri Vdovin)— that would end up both accurately describing two different states of helium-3 superfluid. 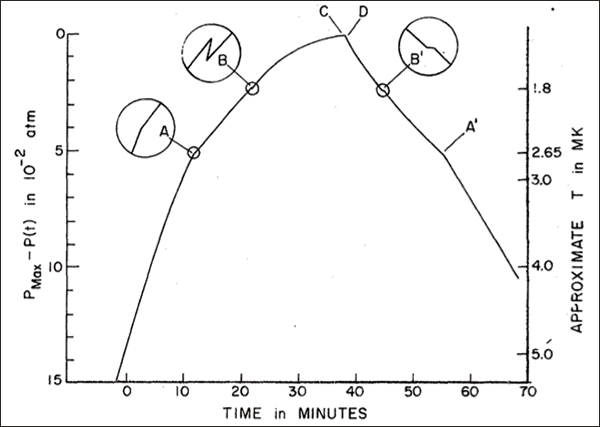 Time evolution of the pressure in the Pomeranchuk cell during compression and subsequent decompression.

The challenge was then for experimentalists to cool helium-3 and actually observe the hypothetical superfluid phase. One fundamental stumbling block was the difficulty of obtaining large amounts of helium-3, which came from slowly decaying tritium made in nuclear reactors. Another problem: getting the helium-3 cold enough.

For nearly every substance, the solid phase has a lower entropy than the liquid phase, and therefore it melts when heated. In 1950, Isaac Pomeranchuk proposed that it would be the reverse for liquid helium-3 below .3 kelvin. The entropy of the solid phase would be higher than the liquid phase, he reasoned, so compressing the liquid phase into a solid would cool it. Fifteen years after he proposed the effect, physicists began using it to get helium-3 to otherwise impossibly frigid temperatures in eponymous Pomeranchuk cells.

By 1970, physicists had spent decades searching for some additional phase transition in helium-3, including several years at millikelvin temperatures, without any evidence. According to David Lee, “a mood of gloom and pessimism prevailed.” At Cornell, Lee, Robert Coleman Richardson, and graduate student Douglas Osheroff were part of a small group poised to make a breakthrough.

Lee, the son of an electrical engineer and elementary school teacher, was born in 1931 and grew up in and around New York city. During college he considered a career in medicine but opted for physics because he found the biology courses boring. Osheroff, born in 1945, came from a family of physicians but hated the sight of blood and was determined to never become one. Richardson, born in 1937, grew up an avid boy scout, without, as he put it “any special scientific interests.” He eventually decided on a PhD in physics after a stint in the Army preparing to get an MBA proved miserable.

In 1971, while Osheroff was recovering from a skiing injury, he developed a new design for a Pomeranchuk cell that allowed the group to monitor minute changes to the melting pressure indicative of a phase transition.

Late that November, Osheroff saw what would become an iconic image: the plot of the pressure during a cooling and warming cycle of helium-3 had two distinctive features on the way up (A and B) and two on the way down (A’ and B’). The bumps were small, but indicative of a phase transition. “All three of us were in a state of euphoria and knew we were on the brink of a major discovery,” Lee wrote. However, because the cell contained both liquid and solid helium-3, the researchers assumed that the transition was occurring in solid helium-3, and in April 1972, they published “Evidence for a New Phase of Solid He3” in Physical Review Letters.

To better understand the nature of the transition, the Cornell group (with the addition of Willy Gully) employed one of the first applications of nuclear magnetic resonance imaging, to observe where in the Pomeranchuk cell the transition was taking place. Solid and liquid helium have different magnetic properties, which show up clearly in NMR. Early one morning, Osheroff saw the NMR results and promptly called Lee to announce that the transition was, in fact, happening in liquid helium.

The researchers were therefore eager to correct their first paper and submitted a second manuscript to PRL. Ironically, the manuscript was initially rejected by a referee, and it was only after appeal that they managed to get it published in October 1972.

A theoretical answer to the observation came swiftly and decisively from Anthony Leggett, a condensed matter theorist in Sussex. Born in 1938, Leggett spent his formative years in and around London. He won a scholarship to Oxford, where he got his first undergraduate degree in classics, and, unusually, decided to go back for another in physics.

In July of 1972, Leggett was on a holiday climbing in Scotland when he heard that Richardson would be visiting Sussex and wished to speak with him. Cancelling his plans, he met with Richardson, who explained the forthcoming NMR data.

Leggett was struck by how much the Larmor frequency of the liquid helium changed at the A transition. It could be explained by the presence of an additional magnetic field of about 30 Gauss that helium atoms exerted on each other, but with one hitch: even at their closest, the maximum magnetic field one atom could exert on another was less than 1 Gauss. Leggett later wrote that “my initial reaction to these results was that they were so extraordinary that they might be the first evidence for a breakdown of some fundamental principle of quantum mechanics.” With this in mind, he set out to prove that the shifted response to NMR could simply not occur.

Instead he ended up explaining it, by introducing spontaneously broken spin-orbit symmetry. How can the weak dipole moments of paired helium atoms conspire to create a 30 Gauss magnetic field? Leggett’s answer was that, like a ferromagnet, the spins were forced into alignment—at the A transition, every Cooper pair would have to decide together on whether they oriented parallel or perpendicularly. In his paper, Leggett concluded “If the hypothesis is correct, we should expect liquid He3 in phase II to show all the phenomena (superfluidity etc.) predicted' for a BCS-type phase.”

Further research corroborated the findings of 1972: liquid helium-3 was a bonafide superfluid, with all of the macroscopic quantum oddities and not one, or two, but three phases. Lee, Osheroff, and Richardson would win the Nobel Prize in 1996, and Leggett would follow suit in 2003.