The US Must Broaden Onramps to the STEM Workforce

Editor’s note: This op-ed was first published in The Hill on June 5, 2021. Since that time, the NSF for the Future Act, which is cited in the piece, passed out of the House of Representatives with strong bipartisan support. The next step is for the bill to go to conference with Senate-passed legislation concerning NSF. This process enables the reconciliation of differences between the pieces of legislation passed by each chamber of Congress.

Imagine an unfortunate world where Americans depend upon competitors for innovation, breakthroughs, and technological progress. In such a world, we won’t create the first universal quantum computer or solve the mystery of dark matter. Nor will we create the next vaccine. Instead, we would have to forgo solving scientific mysteries, purchase breakthroughs from other countries, and get in line with everyone else.

Such scenarios once seemed far-fetched. But indicators show they are becoming increasingly more likely. Earlier this year, the United States fell out of the top 10 of the Bloomberg Innovation Index and also now ranks ninth globally in research and development spending as a percentage of the gross domestic product.

Maintaining our global competitiveness is an urgent problem, and creating a stronger, more diverse workforce in an environment of rapid cycles of innovation and STEM developments is key to competition. A recent report by APS titled, “Building America’s STEM Workforce: Eliminating Barriers and Unlocking Advantages,” points out that the country must do a better job of attracting women, racial and ethnic minorities, and rural Americans to the US scientific and technical workforce. Dr. Sethuraman Panchanathan, Director of the National Science Foundation (NSF), refers to the “missing millions” as people who are capable of succeeding in science, technology, engineering, and math fields but have no access to pathways to get them there. 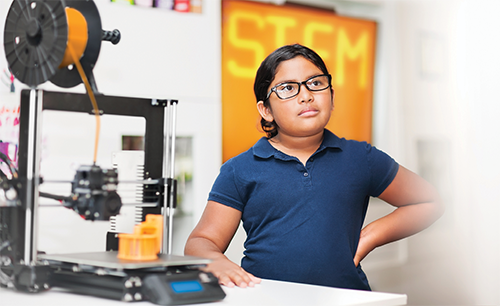 Enabling the “missing millions” to participate in US STEM isn’t just a path to establishing equity; it is the path to restoring US competitiveness in science and technology. According to the 2020 NSF Science & Engineering Indicators, for example, members of underrepresented minorities represented approximately 15 percent of the US science and engineering workforce and more than 28 percent of the US population (ages 21 and up). These percentages point to a clear opportunity for building the STEM workforce with talented and capable US citizens who just need an on-ramp.

Noting the importance of diversity in boosting innovation and productivity, the APS report states that one way to achieve that goal is by expanding opportunities for students from underrepresented groups or underserved areas to participate in research, a high-impact practice for student retention and workforce strengthening and diversification.

Fortunately, leaders of the House Committee on Science, Space, and Technology have a perspective similar to the report’s recommendation, and they included an important provision in the bipartisan NSF for the Future Act. That provision would establish a pilot program to create meaningful, lasting partnerships between major research institutions and emerging research institutions—colleges and universities that have smaller research footprints and capacity, due, in part, to monetary and equipment constraints.

If enacted into law, the legislation would require NSF to direct at least 25 percent of any multi-institutional award exceeding $1 million to emerging research institutions to build research capacity, which could include purchasing new equipment or providing paid research experiences for undergraduate students. The legislation also includes an important review and assessment of the program. The full House Committee on Science, Space and Technology is slated to mark up the bill in the coming weeks.

The benefits of creating this partnership pilot-program would be substantial, both for students and faculty members. For example, students with little formal research training could gain meaningful experience in a laboratory setting, using cutting-edge equipment that otherwise would not have been available. Meanwhile, lead investigators could develop powerful insights into the lived experiences of non-traditional and underrepresented students, as well as strengthen their scientific knowledge through partnerships with major universities.