Lu has worked on some of the flashiest projects in the development of quantum technology.

A physicist at the University of Science and Technology of China (USTC) in Hefei, China, Lu is a member of the team that launched the world’s first known quantum satellite, Micius, which delivers information encoded in single photons to the ground from low-Earth orbit. Using Micius in 2017, his team orchestrated the world’s first intercontinental quantum-encrypted videocall—for 75 minutes, with colleagues in Vienna. In 2020, Lu’s team published in Science that their quantum computer used 76 photons to execute an algorithm in 200 seconds that they estimated would take a conventional supercomputer 2.5 billion years: a demonstration of so-called quantum advantage. (Researchers predict that this algorithm, known as Gaussian boson sampling, could be useful for biology or business applications that involve graph theory, although they have not conclusively demonstrated any applications.)

Now 38, Lu began his career in 2003 as an undergraduate protégé of physicist Jian-Wei Pan, who has been dubbed China’s “father of quantum” and is co-lead editor of the APS journal Physical Review Research. After meeting Pan at a dinner party as a third-year college student, Lu worked with Pan at USTC, where he earned a master’s degree before moving to the University of Cambridge for his PhD. In 2011, he returned to his alma mater as a professor. In less than two decades, Lu has witnessed the field of quantum technology grow from a small academic community to an international arena involving billions of dollars in investment.

Still, experts anticipate that it will take decades of development before they build a fault-tolerant quantum computer—a device that can correct its own errors. Lu spoke to APS News about his career and his perspective on the race to build a useful quantum computer. 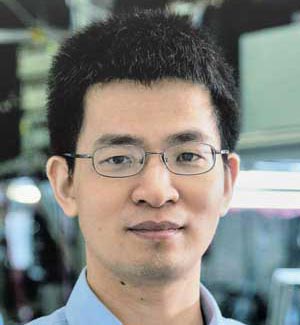 When you first started working in quantum research in 2003, what was your lab’s motivation?

Quantum technology was far less hot then, and we had much less funding. Our motivation was not so ambitious as to build a practical quantum computer, but to investigate fundamental questions in quantum technology. We studied how to connect these devices to build quantum networks and quantum logic gates, and how to realize simple toy models of algorithms.

What experiments did you work on?

As a master’s student, I worked on many different projects. Professor Pan assigned me to entangle six individual photons for the first time. We experimentally demonstrated Shor’s algorithm—the single most shocking algorithm in quantum technology—using photons. [Editor’s note: Shor’s algorithm is a quantum computing algorithm for factoring numbers that is anticipated to be a threat to current encryption systems.] At that time, we used four photonic qubits to factor 15 into 5 and 3. It was extremely simple, but we were the first to do it with entangled photons.

We demonstrated how to encode the state of a single photon into the entangled state of multiple photons. Then, even if a photon gets lost during transmission, we could still recover some quantum information. We also created a quasiparticle called an anyon out of photons and proved that the anyons are neither bosons nor fermions, but something in between.

Now, your team is very much focused on building a practical quantum computer. When did the shift toward technology happen?

2011 was a big year, because the Chinese government officially approved US$100 million in funding for the Micius satellite project. In 2013, they approved another major project for a similar amount of money, to build a fiber optic backbone to connect Beijing to Shanghai. [Editor’s note: Lu’s team has used this infrastructure to conduct experiments related to quantum key distribution, a method for encrypting information that uses single photons.]

In one recent milestone, your group demonstrated quantum advantage using photons, following a similar announcement from Google in 2019 where they performed a different algorithm using superconducting circuits. What is the significance of these quantum advantage experiments?

They are experimental results that will allow us to believe that a quantum computer can solve a problem which a classical computer cannot solve.

So it’s still possible that someone could develop a classical algorithm that outperforms what your quantum computer achieved?

Yes, in principle. We expect people to come up with better classical algorithms. But I also think that eventually we will outpace classical algorithms through hardware improvements and larger quantum processors, whose computing power grows exponentially as you add qubits. In this spirit, we recently [posted arXiv papers on] upgraded quantum computers, one with 113 photonic qubits, and another one with 56 superconducting qubits.

What are the big challenges ahead for quantum computing?

I see three goals ahead. Our first goal is to make a quantum computer that cannot be simulated by any classical computer. The second goal is to make near term applications in quantum chemistry. And the last goal is to have a fault-tolerant quantum computer. Achieving the first goal will give us confidence for the second and third. We also deliver meaningful intermediate results for government and funding agencies. It’s what in Chinese we call yantu xiadan, laying eggs along the way. The idea is to place milestones along the ascent to Mount Everest.

So Everest is building a fault-tolerant quantum computer, and the eggs are smaller achievements along the way.

This strategy will keep the field healthy. If we lay eggs along the way, we are delivering honest results of what our quantum computers can do. This way, we can avoid hype and disappointment.

Is there a problem with hype in China about quantum computing?

I think the hype is everywhere, as startups are launching throughout the world.

What’s your assessment of the startups in China?

So far in China, I am not sure whether startups have a clear strategy to building successful and practically useful quantum computers.

What is the next egg that quantum computing should lay?

The next egg is an application using a noisy intermediate scale quantum device [See APS News, May 2019]. Some of the most promising and nearest term applications of quantum computers is to study quantum mechanics itself—many-body problems, quantum chemistry, and quantum materials.

What are you working on now?

A company in Canada called Xanadu has proposed a number of applications related to boson sampling. These applications are linked to graph-based problems, quantum chemistry, and machine learning. We are looking at whether these applications can actually work. Last year, I also started a new lab focusing on atomic arrays in optical tweezers.

You did your PhD at the University of Cambridge. What is your perspective on the different working styles in China versus the UK?

There is not much difference. A vast majority of our faculty has spent time overseas, and when we return to China, we bring working styles from Cambridge, Heidelberg, Stanford, and so on. One difference is that in China, our culture is more Confucius-like. We call it zhong yong—seeking balance. Students are more modest and self-preserving, and they challenge their professors less.

You’ve been working in this field for nearly two decades now. How much has it met your expectations?

The author is a freelance science writer based in Columbus, Ohio.