Jack Steinberger, a creative experimentalist who tackled a swathe of open questions in particle physics—from pion spin to strangeness to CP violation—died December 12 at the age of 99.

He was best known, though, for research on neutrinos. In 1962, using a novel design to create a beam of pure neutrinos, Steinberger and his colleagues observed that neutrinos came in not one, but two kinds, a finding that had monumental implications for particle physics and the subsequent development of the Standard Model. For the discovery, Steinberger shared the 1988 Nobel Prize in Physics with two colleagues, Melvin Schwartz and Leon Lederman. Steinberger was also a recipient of the National Medal of Science.

“He was a superb engineer as well as a superb physicist,” said Norman Gelfand, a student of Steinberger. “He loved music. He would spend time [with] and give credit [to] anybody. He was not an elitist by any stretch of the imagination. He was passionate about his opposition to nuclear weapons.”

The son of a synagogue cantor and English teacher, Jack Steinberger was born Hans Jakob Steinberger in Bad Kissingen, Germany. When he was only 13, fears of anti-Semitism led his parents to send Jack and his brother Herbert to Illinois, where they stayed in foster homes until the family reunited. He attended New Trier High School, to which he later donated his Nobel medal. 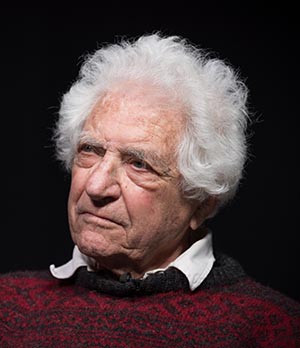 In 1942, Steinberger received his bachelor’s degree in chemistry from the University of Chicago and married his first wife, Joan Beauregard without pomp. There was no ceremony (their only wedding present was a candy bar), and he promptly joined the war effort with the Army Signal Corps at MIT. After the war, Steinberger returned to the University of Chicago to study physics under Enrico Fermi, where he was among the first to find that muons decayed into three particles—a finding that would foreshadow his later discoveries.

Steinberger, in his own words, had “leftist sympathies” throughout his life. But in Berkeley’s Radiation Lab in 1950, as McCarthyism swept the country, he paid a price for it. Steinberger was asked to sign a loyalty oath against communism. He refused and was subsequently fired.

“His standing up for principle and not signing the loyalty oath tells you a lot about him as a person,” Gelfand said.

Within the year, Steinberger found employment at Columbia University, where he would make some of his most important contributions to physics. During the 1950s, Steinberger put his engineering background to work and built several state of the art bubble chambers which he used to measure the strange decays of pions, which led to results like the discovery of the sigma hyperon.

By the early 1960s, theory pointed toward the possibility that the recently observed neutrinos might come in multiple kinds. Steinberger, working with colleagues, developed a powerful way of producing the elusive particles. They fired 15 GeV protons at beryllium target, creating pions, which decayed into muons and neutrinos before slamming into 44 feet of steel from the decommissioned battleship USS Missouri. Only the neutrinos made it through the steel, into a spark chamber. In a landmark paper in Physical Review Letters, Steinberger and his coauthors concluded that “The neutrinos we have used produce μ mesons but do not produce electrons, and hence are very likely different from the neutrinos involved in β-decay.”

It was also a tumultuous time in his personal life—Steinberger and his first wife separated, and he married Cynthia Alff, then a Columbia graduate student. They remained together for over a half century.

After a 1964 sabbatical at CERN working with Carlo Rubbia on CP violation, Steinberger and Alff—in part due to the Vietnam War—made the choice to move to Geneva, where he would spend the rest of his physics career. Steinberger’s last experiment was ALEPH, a particle detector on LEP, which produced a number of critical results, including a fitting career capstone: the number of neutrino generations (2.990 ± .015 by 1995).

“He was somebody you could talk to,” said Monica Pepe-Altarelli, a CERN physicist who worked on ALEPH. “But Jack could also be intimidating because he had these very piercing blue eyes and that very logical way of thinking.”

Outside of physics, Steinberger was animated by social issues like climate change and nuclear nonproliferation and education. A passionate outdoorsman, he enjoyed sailing and rock climbing, in which he found parallels to physics.

Steinberger remained a fixture at CERN for years after retiring, showing up at his office to read papers, and attending talks which he would appear to sleep through, until the end, when he would ask perceptive, penetrating questions.

The author is a freelance science writer based in Bellport, New York.