Physics In a Virtual World

Like any attentive host, Marco Del Tutto found it impossible to relax at his own party. The Fermilab physicist flitted from room to room to monitor his chattering guests and fret over whether they were having a good time.

But this was no regular in-person party. Del Tutto was co-hosting the 29th International Conference on Neutrino Physics and Astrophysics—and all the rooms were virtual. Like many conferences in 2020, this meeting occurred over the now-ubiquitous application Zoom. But organizers introduced one innovative twist: a poster session conducted in virtual reality.

The poster sessions took place in 28 virtual 3D rooms, each room arranged with 5 posters and decorated with pixelated renderings of couches, potted plants, and other furnishings of Del Tutto’s choosing. To attend, you entered the rooms as a humanoid avatar in your web browser and navigated the space like a video game. A maximum of thirty avatars were allowed in a room at a time.

Upon entering, you could overhear the conversation of others in the room, with the audio of nearer avatars louder. To make the posters readable in VR, Del Tutto blew up the proportions to about the size of a movie screen. Presenters displayed more than 500 posters in total, spread over four sessions. “We’d never done anything like this before,” says Del Tutto, who designed and built the poster sessions. 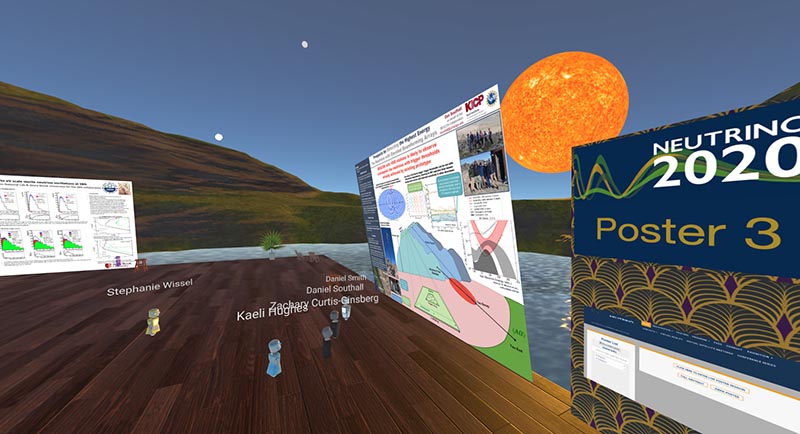 A poster session in cyberspace

Del Tutto also added personal flourishes. Because the conference originally was to take place in Chicago, he created a few rooms with reconstructions of the city’s famous landmarks, such as Millennium Park, produced using his 3-D photos taken with his phone. One room included a herd of bison, an allusion to the animals that Fermilab has hosted on its premises since 1969.

“It was really fun to attend the poster session,” says María Martínez-Casales, a graduate student at Iowa State University who presented a poster. During her poster session, people asked her questions, and she was even able to point at her display with a virtual laser pointer.

In particular, Martínez-Casales found that certain social interactions were smoother online. “It was easier to ask questions,” she says. “I would consider myself a shy person. In normal life, maybe I would have had more trouble approaching [someone] if I don’t know anything about their poster.”

Del Tutto says the poster session was “absolutely a success.” But in the moment, it was a risky choice. Organizers, including Del Tutto himself, were “skeptical” that the VR format would work, he says. To improve its chances, Del Tutto ran a beta version for a couple dozen users about a week before the conference. Had it gone badly, they had a backup plan to run the poster session on Zoom.

The virtual format made discussion for some attendees much easier. Because the avatars’ appearances were devoid of race or gender, some expressed that they found it easier to meet and talk to new people, says Del Tutto.

For Bernadette Cogswell of Virginia Tech, that comfort extended to the conference at large. “[This] conference is one of the first times in my physics career that I have even felt comfortable talking because it’s virtual,” Cogswell, a Black woman and a theorist, wrote on the conference’s Slack channel.

In addition, the virtual format allowed for discussion beyond usual time constraints, Cogswell told APS News. Over the Slack channel, people could message presenters at their leisure. Cogswell also messaged with scientists who do not speak English as a first language. For them, usually, “it’s very hard to involve yourself in conversations, because it takes so long to formulate it in your mind, by the time you’re done, the conversation has moved on,” says Cogswell. They found it easier to express themselves online, she says.

Still, virtual interactions have their limitations. Cogswell points out that while she found it easier to converse with strangers in the virtual world, it’s difficult to forge deeper connections.

For Cogswell, though, the virtual meeting has served its purpose. After she typed up a question about a presentation in the app, a former colleague messaged her. “He said, ‘I have a position I’ve been trying to fill for a year and a half. […] Can I offer you a job?’” she says. She accepted, and she’s now working from home.