Today, fighter jets routinely achieve speeds faster than the speed of sound, but there was a time when scientists questioned whether the increase in aerodynamic drag as an aircraft approached that threshold would prohibit such a feat. The honor of being the first test pilot to break the sound barrier belongs to Charles Edward “Chuck” Yeager.

Born in 1923, Yeager’s parents were farmers in Myra, West Virginia. He played basketball and football in high school, graduating in 1941. Inspired by his experience at a summer Citizens Military Training camp in Indiana, he enlisted with the US Army Air Forces that fall. Technically ineligible for flight training because of his age and lack of advanced education, Yeager was admitted to the program when World War II broke out, in part because of his excellent visual acuity.

Two years later, Yeager received his pilot wings, shipping overseas to join the war effort on November 23, 1943. He proved to be an outstanding fighter pilot, racking up 11.5 official victories; he was the first pilot to down five enemy aircraft in a single day (“ace in a day”) on October 12, 1944. But he later expressed regret and disgust at some of the wartime atrocities committed by personnel on both sides of the conflict, including being ordered to participate in a strafing mission that targeted civilians. After the war, Yeager became a test pilot at what is now Edwards Air Force Base.

Several claims of breaking the sound barrier emerged during World War II and its immediate aftermath, but most were attributed to instrumentation error. The Bell X-1 was especially designed for the task. Capable of absorbing 18 Gs, the X-1 had thin, upswept wings and a nose modeled after a .50 caliber bullet. It also boasted four rocket engines. 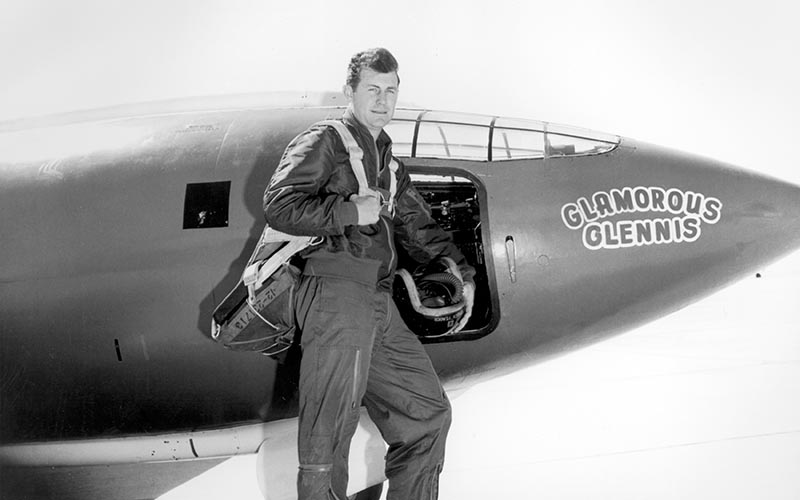 “Basically, the X-1 was a pure rocket,” Yeager recalled in a 1997 interview with NOVA. “It burned liquid oxygen and a mixture of five parts alcohol to one part water. You know, we’d been fooling around with jets. Jet engines didn’t have the thrust to push the airplane into the region of the speed of sound or beyond.” He nicknamed the X-1 the Glamorous Glennis, after his wife.

The original plan was to choose a test pilot without a family, but Yeager argued that having a wife and little boy would make him more careful, and got the assignment. He later claimed he never worried about whether or not something would go tragically wrong. “It wasn’t my job to think about that. It was my job to do the flying.”

Two days before the scheduled flight, Yeager broke two ribs after falling off a horse. Determined not to be sidelined, he asked a veterinarian in a nearby town to treat his injury, telling only his wife and fellow test pilot Jack Ridley. By the day of the flight, Yeager was in so much pain that he was unable to close the X-1’s hatch; fortunately, Ridley left part of a broken broom handle in the cockpit to help Yeager seal the hatch door.

On October 14, 1947, Yeager and the X-1 achieved 20 seconds of supersonic flight. “There was no buffet, no jolt, no shock,” he later recalled. “Above all, no brick wall to smash into. I was alive.” On the ground, however, the resulting change in pressure sounded like an explosion reverberating across the California desert.

The news of Yeager’s record-breaking flight wasn’t publicly announced until June 1948. He went on to have a distinguished military career, holding several squadron and wing commands and achieving the rank of brigadier general in 1969, assigned as vice-commander of the Seventeenth Air Force. He retired from the Air Force in 1975, although he still occasionally flew as a consulting test pilot for USAF and NASA.

Yeager made a cameo appearance in the 1983 movie The Right Stuff—based on the 1979 book by Tom Wolfe—as a bartender named Fred (Sam Shepard portrayed Yeager in the movie). But Yeager wasn’t selected for the first astronaut program because he didn’t have the requisite educational qualifications. He was also a technical advisor on three flight simulator video games. He was inducted into the National Aviation Hall of Fame in 1973.

Today, combat aircraft can easily break the sound barrier, thanks to the introduction of improved design features like swept wings and more powerful engines. Though many in the industry hoped that the introduction of supersonic commercial airlines in the 1970s—the Concorde and the Tupolev Tu-144—would lead to the next evolutionary stage of airline travel, neither were replaced when they were decommissioned. (The Concorde made its last flight in 2003.)

Records have continued to fall since Yeager’s historic flight. On November 20, 1953, pilot Scott Crossfield reached twice the speed of sound in a D-558-II Skyrocket. Also in 1953, Jackie Cochrane became the first woman to break the sound barrier in a Canadair Sabre; Yeager was her wingman. A supersonic car called the ThrustSSC, driven by Royal Air Force pilot Andy Green, surpassed Mach 1 on October 15, 1997, almost exactly 50 years after Yeager’s fight.

And in 2012, Felix Baumgartner became the first person to break the sound barrier during freefall. He jumped for a world-record altitude of 24.26 miles (128,100 feet) and hit speeds as high as 833.9 mph (Mach 1.26) during his 4 minute, 18 second freefall. On the same day, Yeager—then 89—broke the sound barrier again in an F-15 Eagle he nicknamed Glamorous Glennis III, although he reportedly only flew the plane during takeoff and landing. It was the last time he participated in an official Air Force flight.