This month marks the four-year anniversary of LIGO’s groundbreaking announcement of the first direct detection of gravitational waves, ushering in a new era of multi-messenger astronomy. But for decades after Albert Einstein’s general theory of relativity predicted the existence of gravitational waves, physicists assumed it would be impossible to detect them. Joseph Weber was the first to build an experiment to do just that, and while his claims of detection were later discredited, he helped found the field.

Born to Lithuanian Jewish immigrants in New Jersey in 1919, Weber’s birthname was Yonah, which later morphed into Joseph. He enrolled at Cooper Union, but his schooling was a financial hardship for the family, and he dropped out to join the US Navy. He served as a radar expert and a navigator, and survived the sinking of the carrier USS Lexington during World War II, later taking command of a sub-chaser for an invasion of Sicily in 1943.

After leaving the Navy in 1948, Weber joined the electrical engineering department of the University of Maryland, earning a PhD in physics in his spare time from Catholic University—a condition of his hiring. He chose to study atomic physics and drew on his naval experience working with microwaves to come up with the concept for the maser, outlining his design in a 1952 public lecture in Ottawa.

Among those who read Weber’s paper was Charles Townes, who had been working on a similar concept, as had two Russian scientists, Nikolay Basov and Aleksandr Prokhorov. The maser led to the invention of the laser, and Townes, Basov, and Prokhorov won the 1964 Nobel Prize in Physics for their work. Weber had been nominated but was omitted from the award. A disappointed Weber later told friends that the snub influenced his decision to hunt for gravitational waves, since it was a field that was so notoriously difficult, there would not be much competition. 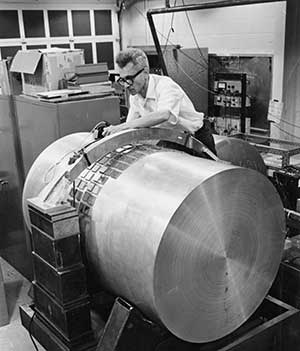 During his 1955 sabbatical year, Weber studied gravitational radiation with John Wheeler at the Institute for Advanced Study in Princeton and came up with a way to potentially detect these faint ripples in the fabric of spacetime. His detectors were known as “Weber bars”: large aluminum cylinders, about two meters long and one meter in diameter, that would vibrate at just the right resonant frequency in response to a passing gravitational wave. The bars were outfitted with piezoelectric sensors capable of detecting minute changes in the length of the cylinders.

The first bar was housed in his laboratory at UMD, with other bars installed roughly a mile from campus in a makeshift garage. Weber placed another bar at Argonne National Laboratory, the better to capture candidate “coincident events” and rule out false signals due to noise. And he devised his own algorithm to analyze the pulses, despite his lack of experience with statistics—a shortcoming that would later contribute to the dismissal of his claims.

Weber submitted a paper to Physical Review Letters on February 8, 1967 (which was published the following month), reporting on the first two years of operation for his experiment. While the paper primarily placed some constraints on gravitational wave detection, he wrote, “The possibility that some gravitational signals may have been observed cannot completely be ruled out.”

At a 1969 general relativity conference, he went further and announced success in detecting gravitational waves. It caused a sensation and launched Weber to academic fame. He published a paper in PRL that same year, claiming to have detected around two dozen “coincident events” over 81 days. In 1970 he followed up with another PRL paper claiming detection of 311 such events over seven months.

The problem was that nobody else ever picked up anything other than random noise when they tried to replicate Weber’s experiments. Groups at IBM, Stanford, Bell Labs, Oxford, Cambridge, and in Scotland, Germany, Louisiana, Italy, Moscow, and California, all tried to repeat the experiments with their own Weber bar designs—to no avail. IBM’s Richard Garwin denounced Weber's claim publicly at an MIT conference in 1974. Theorists concluded that Weber’s observations couldn’t be correct because, as Garwin declared, “The universe would convert all of its energy into gravitational radiation in 50 million years or so, if one were really detecting what Joe Weber was detecting.”

By the late 1970s, Weber’s claims of detection had largely been discredited within the physics community. Weber himself was steadfast in his claims, dismissing one colleague who sought a meeting with the words, “You can’t just walk in off the street and do gravitational wave experiments.” His fame faded and funding dried up.

Weber died on September 30, 2000, while being treated for cancer, having continued his experiments until the end. One of his Weber bars is now displayed at the LIGO facility in Hanford, Washington, in recognition of his role in launching the search for gravitational waves. “No one else had the courage to look for gravitational waves until Weber showed that it was within the realm of the possible,” Wheeler wrote in his autobiography.

Weber’s second wife, Virginia Trimble, was on hand in February 2016 for the LIGO announcement and demurred on the question of whether she thought he had really detected gravitational waves. But she echoed the sentiments of many other leading physicists lauding Weber’s pioneering role in getting the hunt off the ground. “I think if there had been two technologies going forward they would have pushed each other, as collaborators not as competitors,” she told Science magazine. “It might have led to an observation sooner."