Two APS members are among the recipients of 2019 Nobel Prize in Chemistry. The Prize is awarded to APS Fellow John B. Goodenough (The University of Texas, Austin), APS Life Member M. Stanley Whittingham (The State University of New York at Binghamton), and Akira Yoshino (Asahi Kasei Corporation; Meijo University) for development of lithium-ion batteries.

Goodenough, Whittingham, and Yoshino will share the prize equally for their separate breakthroughs that contributed to the creation of the rechargeable batteries that power much of today’s technology. Lithium-ion batteries also play an important role in the viability of renewable energy use, providing storage for solar and wind power, and powering long-range electric cars. As such, the technology is poised to play an increasing role in mitigating the effects of energy use on climate change.

Whittingham began developing the modern lithium-ion battery during the 1970s oil crisis in a bid to create energy technology free from fossil fuels. He discovered that titanium disulphide made an ideal cathode for a lithium battery. Coupled with the metallic lithium anode, his work resulted in a powerful—although reactive and potentially explosive—battery.

Goodenough, a solid-state physicist, also wanted to contribute to the development of alternative energy storage systems in the 1970s. Building on Whittingham’s initial design, Goodenough recognized that a metal oxide could replace titanium disulphide for more powerful, and more stable, batteries. He discovered that cobalt dioxide was the ideal cathode resulting in lighter-weight, high-capacity batteries. 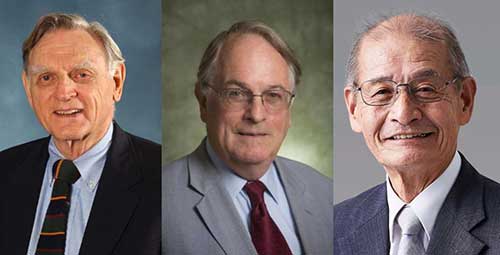 Yoshino made the final breakthrough that resulted in the first commercially viable lithium-ion battery in 1985. He replaced the reactive lithium anode with a carbon material called petroleum coke, which could store lithium ions in a stable manner. His work resulted in a safer high-capacity battery that can be charged hundreds of times.

The Nobel Prize, first awarded in 1901, is widely considered the highest honor in science, economics, and literature. The 2019 Nobel Laureates will be awarded medals at a ceremony in December, along with 9 million Swedish krona (just over $US 1 million), which will be shared equally between Goodenough, Whittingham, and Yoshino.