Science as a Laughing Matter

Throwing paper planes at a science teacher wouldn’t go over well in most situations. But that’s just one of the norms violated by the Ig Nobel awards, which have been celebrating the quirky side of science for nearly three decades. This year’s award ceremony, held on September 12 at the Sanders Theatre of Harvard University, was a surreal experience with wacky acceptance speeches, nearly naked postmen, and scientists dressed up as oddly shaped poo. The 1,100 spectators—which included a number of Nobel laureates on stage—relished the chance to have fun with award-winning research on cockroach magnetism, healthy pizza-eating, and automated diaper-changing.

Since 1991, the Ig Nobel Prize has honored scientific achievements that “first make you laugh, and then make you think,” selected from thousands of submissions by the editors of the science humor magazine Annals of Improbable Research and by an international group of researchers. Most of the awards have gone out to top-notch scientists—like Andrew Geim, who first won an Ig Nobel prize for levitating a frog and then a Nobel prize for discovering the wonder-material graphene. But a few awards have been purely satirical, like the peace prize that went to the Belarus police for arresting a one-armed man for applauding. 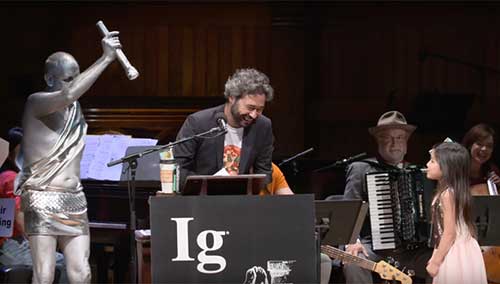 To kick off this year’s Ig Nobel ceremony, physicist Melissa Franklin—who announced herself as a professor of “something” at Harvard—gave the audience the green light to launch hundreds of paper planes at the stage. As per tradition, a prominent physicist came out and humbly swept the paper mess away with a large broom. This year, Harvard’s Mikhail Lukin stepped in for the dearly departed Roy Glauber, who had been the “Keeper of the Broom” for decades before and after earning a physics Nobel for his work on quantum optics.

Once the stage was clear, soccer-like cheering erupted for the first prize announcement. In a big win for Italy, Silvano Gallus of the Mario Negri Institute for Pharmacological Research in Milan was awarded the Ig Nobel in medicine for “collecting evidence that pizza might protect against illness and death, if the pizza is made and eaten in Italy.” In a 60-second speech, Gallus explained how, sifting through big data, he found that pizza consumption is correlated with a reduced risk of heart attacks and digestive-tract cancers—but only in his homeland.

The biology prize went to a group of physicists for the discovery that “dead magnetized cockroaches behave differently than live magnetized cockroaches.” The difference is due to cockroaches drying up when they die, which makes their interiors more viscous. That viscosity keeps magnetized particles aligned for longer times than in live insects. The team got the idea to test this difference while using an ultrasensitive magnetometer to study animal magnetoreception. The researchers picked cockroaches because they can sense Earth’s magnetic field and “because they are, um, quite abundant in our cafeteria,” said coauthor Herbert Crepaz of the Nanyang Technological University in Singapore.

Other award winners included an Iranian engineer who patented a diaper-changing machine and a research group that discovered a temperature asymmetry in the testicles of French postmen (a “mock” demonstration at the ceremony was instantly censored). The Ig Nobel peace prize recognized a well-meaning attempt to measure the pleasure of scratching an itch, while the physics prize went to a study that explained the cubic-shaped poo of little Australian marsupials called wombats. Two of the physics prize recipients, David Hu and Patricia Yang of Georgia Institute of Technology, achieved Marie-Curie-like status by winning their second Ig Nobels. “While bizarre, this is a very important prize,” Hu said. “Many people consider this work the pinnacle of my research.”

The winners had to travel to the ceremony on their own dime, but they all received a ten-trillion-dollar award—alas, in the practically worthless Zimbabwean currency. A better reward was receiving a handshake from genuine Nobel winners: Jerome Friedman (physics), Eric Maskin (economics), and Richard Roberts (physiology or medicine) were this year’s bemused laureates in attendance.

Unlike most scientific events, the evening was filled with funny interludes—parodies of experiments, zany costumes, and an opera about bad habits. One bad habit that many physicists are guilty of is talking longer than the allotted time. The Ig Nobel ceremony dealt with this problem by having an 8-year-old girl repeatedly yell “Stop, I am bored!” at anyone who went over time. It fit well with the keynote speech’s theme: “Life should be long and speeches should be short,” which Harvard grad student Cari Cesarotti took to heart in her seven-word explanation of the Large Hadron Collider: “Measure small by building big: Size matters.”

The deeper meaning of all the madness was revealed in conversations with both Nobel and Ig Nobel winners. They all felt that humor is a powerful vehicle for communicating science because it strips away the aura of seriousness and complexity that distances science from its audience. “Laughter is an exceptional tool,” Friedman said. “It’s good for your health, and it’s good for your psyche. It allows people to connect with science in a way that wouldn’t otherwise be possible.”

After all the hoopla was over, Marc Abrahams, master of ceremonies and Ig Nobel founder, closed the ceremony with his signature salute: “If you didn’t win an Ig Nobel prize today—and especially if you did—better luck next year!”

Matteo Rini is the Deputy Editor of Physics Magazine, from which this article was reprinted.