Historical records of supernovae stretch as far back as 185 CE, but one of the most significant cosmic explosions in terms of advancing astronomical knowledge occurred in November 1572. Among those who observed the event was Danish astronomer Tycho Brahe—the last famed astronomer to make observations of the night sky without the aid of a telescope.

Brahe was born into the nobility at his family’s ancestral seat of Knutstrop Castle in December 1546. When he was only two, Brahe went to live with his childless uncle, Jorgen Thygesen Brahe—the only one of 12 siblings sent away for his upbringing, although Brahe later noted that his aunt and uncle treated him as a son, and Jorgen ultimately made him his heir. He began attending the University of Copenhagen at age 12, initially studying law. But then he witnessed a solar eclipse on August 21, 1560, triggering his lifelong passion for astronomy.

This was a critical period in astronomy, as the Ptolemaic model of the universe—with a fixed Earth placed at the center of the solar system, and the sun, moon, and planets orbiting around it—was being challenged by the Copernican worldview, in which everything orbited the Sun at the center. During a tour of Europe when he was 15, Brahe witnessed a conjunction of Jupiter and Saturn. He noticed that neither the Copernican nor Ptolemaic models accurately predicted the conjunction. He became convinced that more accurate observations would be key to making better predictions about such events. 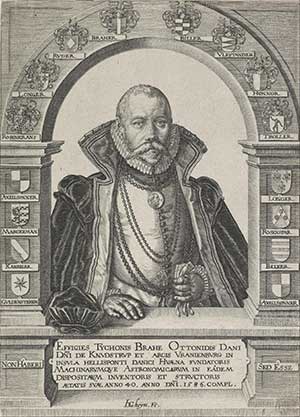 Tycho was making observations from an observatory he set up at Herrevad Abbey on the night of November 11, 1572, when he spotted a very bright new star in the constellation Cassiopeia. He was not the only one to do so, but it is known as Tycho’s Supernova because he undertook the most detailed study of its properties. Many contemporary astronomers who still subscribed to the Ptolemaic view concluded the object must be in the so-called “terrestrial sphere” (i.e., inside the orbit of the moon), since the heavenly firmament should be unchanging.

Brahe begged to differ, dismissing the naysayers in De Stella, his treatise on the new star that he published the following year: “Oh thick wits. Oh blind watchers of the sky.” For Brahe, the scientific evidence clearly showed this was a distant star. It was certainly much farther away than the moon since there was no daily parallax against what was then believed to be a background of fixed stars. Nor did said object change its position relative to those fixed stars. So it could not be a planet, either.

We now know this object was a supernova (designated SN1574). Radio astronomers first detected the remnant in the 1950s, followed by optical observations. Astronomers discovered another star in 2004, dubbed Tycho G, which is probably the companion star to the white dwarf that ultimately became SN1574. In 2008, a team of scientists analyzed its light-echo spectrum and declared it to be a Type Ia supernova. The supernova also inspired Edgar Allan Poe’s poem, “Al Aaraaf,” and self-described “forensic astronomer” Donald W. Olson has argued that the same star is mentioned in Shakespeare’s Hamlet (the “star that’s westward from the pole”).

King Frederick II granted Brahe an estate on the island of Hven, where he built an astronomical research Institute called Uraniborg (named after Urania, the muse of astronomy). His observation of a great comet from November 1577 to January 1578 inspired him to devise his own Tychonic system, combining what he felt were the two conflicting models’ respective strengths. He tried to combine the accuracy and geometrical appeal of the Copernican system, and the rich philosophical aesthetics of the Ptolemaic worldview. The moon correctly orbited the Earth in his model, but he still thought the Sun orbited the Earth.

There is no shortage of entertaining anecdotes about Brahe. He famously lost the bridge of his nose in a sword duel while a student at the University of Rostock in 1566 and wore a prosthetic for the rest of his life. Legend held that the prosthetic was made of silver or gold, but when researchers exhumed his body in 2010 and analyzed the remains, they concluded it was actually made of brass. Contemporary accounts also hold that Brahe kept a tame elk, which purportedly died after falling down the stairs, having drunk great quantities of beer at dinner.

Brahe fell out of favor with the new King Christian IV in his later years. He left his Hven estate in 1597, shortly after completing a star catalogue providing the positions of 1000 stars. He spent the rest of his life in exile, becoming Imperial Court Astronomer in Prague to the King Rudolf II of Bohemia. Johannes Kepler worked closely with Brahe as his assistant during this time, helping him compile a new, more accurate star catalogue: the Rudolphine Tables.

Brahe’s death was as colorfully bizarre as much of his life. Kepler reported that they were at a banquet in Prague, and Brahe refused to leave the table to relieve himself, deeming it a breach of etiquette. When he got home, he was unable to urinate, and died 11 days later, most likely from a burst bladder. (The suggestion that he was murdered via mercury poisoning was debunked in the same exhumation analysis that confirmed his brass prosthetic nose.) He supposedly wrote his own epitaph during his final days: “He lived like a sage and died like a fool.” He is buried near the Astronomical Clock in Prague.