After obtaining his degree and carrying out postdoctoral research on amorphous semiconductors, Suha Oguz worked as a scientist at the corporate research lab of a defense contractor. His career followed a path into technical management, and he eventually retired after 11 years as Vice President of Research and Development for a $7 billion business. He credits his success to being able to bridge the gap between the engineers and scientists working on technical research, on the one hand, and the business development staff and lawyers on the other.

Oguz remembers numerous occasions when the business staff did not like conclusions reached through rigorous experiments and instead pushed for interpretations not supported by those experiments and advocated “alternate” facts.

“Science, basically, is not a matter of opinion. It's a matter of objective observations, theories, and hypotheses. These are the kinds of things you can appreciate about science without being a scientist,” says Oguz. He feels that a basic level of science literacy can enable those outside the sciences to understand and appreciate the rigor, objectivity, and utility of science and its pivotal role in their lives.

As an industrial physicist, Oguz recalled a conversation with a plumber at his laboratory who remembered a nitrogen balloon science demonstration from grade school years ago. Oguz was shocked and surprised by how much of an impact that one moment had made and was impressed that the plumber had a warm feeling towards and an understanding of physics.

“Instead of viewing himself completely outside science, he felt very comfortable that he could contribute something,” recalls Oguz. 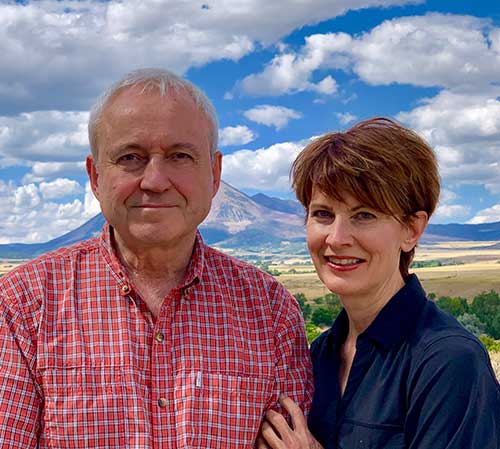 Oguz and his wife, Leslie Lord, had been considering ways to combat science illiteracy and promote the appreciation of science. They have discussed their legacy and their wish to make a lasting impression by supporting science. Lord spent many years in the nonprofit world, most recently serving on boards of organizations that provide students with resources such as broadband internet. After some research and thought, they found their answer in the APS education, diversity, and public engagement programs and identified a way to make an impact.

“The public needs to have a better understanding of the sciences,” Oguz says.

APS programs that were demonstrated to improve science education such as PhysicsQuest and PhysTEC appealed to Oguz and Lord. Their goal is not in increasing the number of those going into the sciences, but getting the next generation of lawyers, legislators, and professionals to appreciate science.

“If you end up getting that exposure early on, then you don't dispute climate change [for example],” Oguz suggests. “It's very easy to develop very strong opinions either way, on both sides of the political spectrum. If you are ignorant about science, you can readily convince yourself that scientific theories and facts are just opinions that can be conveniently ignored or discredited.”

The APS programs in education and diversity were the vehicle towards his and Lord’s philanthropic goals. APS programs that support mentorship for the under-represented students in physics programs were also attractive to Oguz and Lord as they believe in the importance of visible role models.

Oguz recalls that, as an undergraduate student at Bosphorus University in Istanbul, he didn't think twice about the fact that approximately half of his electrical engineering class were women as this was common and accepted.

Yet a few years later, in his first class at Harvard as a graduate student, he noted that of the 50 people in the auditorium only three were women, and very few, if any, were minorities. Oguz crossed paths with relatively few women and very few minority scientists throughout his career and met only one African-American physicist.

Oguz believes that, thanks to APS programs, the students selected from among their peers and supported towards higher education and a professional career can emerge as visible and alternative role models in their communities and help generate interest in science and an appreciation that science is in nobody’s exclusive domain.

Having found exactly what they were looking for in the Education, Diversity, and Public Engagement programs at APS, Oguz and Lord arranged for a seven-figure estate gift to APS through the Legacy Circle program. They had a chance to speak with APS Director of Programs, Monica Plisch, who answered any remaining questions and assured them that their legacy was in good hands. He and Lord are confident that APS, their sole beneficiary, will foster education and inclusion for the next generation.

For information on joining the Legacy Circle or on how you can support the activities of APS, please visit aps.org/about/support/.or reach out to APS Campaign and Donor Relations Manager, Mariam Mehter at mehter@aps.org or (301) 209-3639.