Highlights from the 2019 Canadian-American-Mexican Physics Conference

The Canadian-American-Mexican (CAM) Graduate Student Physics Conference is a gathering of physics students from Canada, Cuba, Mexico, and the United States, and has been organized every two years since 1994. This year, the CAM conference took place from July 24 to 27 in Sudbury, a small town in Ontario, known for the world-class science facilities of SNOLAB—the Sudbury Neutrino Observatory—located in a nickel mine two kilometers underground.

The CAM Conference was hosted jointly by SNOLAB and Laurentian University. Laurentian opened its doors to around a hundred graduate students for the conference, which featured plenary talks and parallel sessions on a variety of topics, tours of SNOLAB, and various networking and career growth opportunities.

The conference kicked off before registration with a tour of SNOLAB and SNOLAB+, the 6300 m2 addition to the original facility. We dressed in mining gear, took the mine elevator, walked two kilometers, and finally, at the entry of the lab, we left our mining gear behind. The group was divided to shower and get dressed in clean room gear—a process the scientists and employees at the lab do every day. We saw PICO 40 and PICO 60, which are both dark matter detectors, and the beginning of the construction of the Helium and Lead Observatory (HALO), which will be used to detect supernovas.

After the tour, we returned to Laurentian for a special function in the planetarium: Paul-Émile Legault, the director of the facility, gave a talk about how to find constellations with the identification of a specific star at any time of the year. We then split into groups for an evening of networking at different locations around Sudbury.

On Thursday morning, students gathered in the main conference room for the first plenary of the day, given by Adrien Liu (McGill University), a cosmologist, who spoke about his research on the beginning of our universe’s history, when first-generation stars and galaxies were forming. 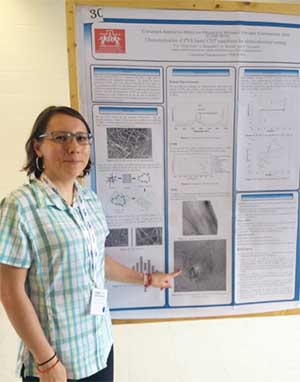 Two more plenaries followed in the afternoon with speakers Zohar Nussinov (Washington University at St. Louis) and Karen Salomé Caballero Mora (Autonomous University of Chiapas). Nussinov spoke about his research in condensed matter, particularly the application of simple statistical mechanics and classical mechanics ideas to graph theory. Caballero Mora spoke about her involvement in the High Altitude Water Cerenkov Gamma-Ray Observatory (HAWC) and the supercomputer laboratory she is coordinating at Chiapas.

Parallel sessions took place between the plenaries in different classrooms, and the day finished with a dinner in the alumni hall. The parallel sessions included many topics: statistics, cosmology, philosophy, physics education, nuclear physics, quantum physics, condensed matter and materials, particle physics, physics in medicine and biology, and astrophysics.

On Friday, students had a choice between another tour of SNOLAB or attending the next plenary session, given by particle astrophysicist Jeter Hall, Director of Research at SNOLAB. Next came more parallel sessions and a mini-workshop on equity for gender and minorities in STEM. After lunch, Tonatiuh Matos (Centro de Investigación y de Estudios Avanzados del IPN) spoke about his dark matter research at the second plenary of the day. The plenary was followed by a panel discussion of science funding with tips on how to present a project to different agencies in order to get funding.

Next came the poster slam, which featured presentations from 35 graduate students. At the slam, a jury selected posters that would go on to contend in the poster competition. At the alumni hall, we had the opportunity to view the posters, and the jury selected the winners. To finish the day, we attended a banquet at the North Science Museum.

The conference closed with the plenaries of Eduardo Martínez, a neurophysics researcher who develops tools for understanding brain activity, and APS Careers Program Manager Midhat Farooq, who presented the career resources and opportunities available through APS, followed by a panel discussion about publications and closing remarks. Overall, it was a diverse conference, with a focus on interdisciplinary networking, which is an enriching experience for students.

Paloma Alejandra Vilchis León is a PhD student at Iberoamericana University at Mexico City, working in the areas of materials, nanoscience and nanotechnology. She is a member of the Sociedad Mexicana de Física and a contributor to "Random," a science radio program that is transmitted on Ibero Radio in Mexico City.