Sorting Out the Neutron Lifetime

For over a decade, physicists have puzzled over the neutron lifetime: how long, on average, it takes the isolated particle to decay into a proton, electron, and antineutrino. Counting the number of neutrons in a container over time, they measure the half-life to be about 14 minutes and 39 seconds. Using a different experimental method where they count one of the neutron’s decay products, they measure the lifetime to be about 8 seconds longer.

“It’s an exciting time to work in the field,” says Shannon Hoogerheide of the National Institute of Standards and Technology (NIST). In 2018, three independent teams of physicists have published new measurements of the neutron lifetime, which have improved precision but preserve the discrepancy.

During a mini-symposium at this year's APS April meeting in Denver, experts gathered to develop strategies for resolving the discrepancy, including a tantalizing theory involving dark matter decay.

But the discrepancy could still be the result of systematic uncertainties, so some groups are working to make better measurements. 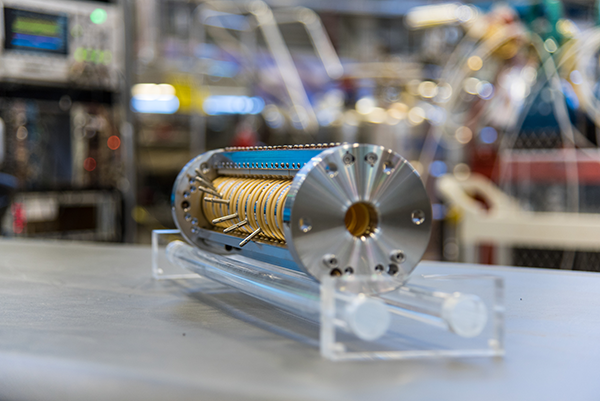 NIST proton trap for measuring neutron lifetime. A free neutron entering the trap as part of a beam will decay into a proton, an electron, and an antineutrino. The number of protons detected can be used to calculate the neutron lifetime.

Hickerson’s method, a so-called bottle experiment, involves counting neutrons over time and results in the shorter measured lifetime. He and his colleagues trap ultracold neutrons at a temperature of about a millikelvin inside a one-meter diameter container—“the bathtub,” they call it.

“We fill it with neutrons, and then we count,” he says. “And we fill it again, wait longer, and count again. Then we fit an exponential to that decay.” The three 2018 measurements, one made by Hickerson’s group, were all bottle experiments, albeit with slightly different setups [Science 360, 627 (2018)].

The other method, known as a beam experiment, involves counting the protons that the neutrons decay into. At NIST, researchers send a beam of neutrons through an electromagnetic field, which traps and then deflects any proton decay products, explained Hoogerheide. NIST’s experiment yielded the most recent beam result in 2005. Using the same data, they updated those results with better calibration in 2013, and her team is currently working to improve that measurement.

Researchers were particularly excited to discuss whether the discrepancy arose from an unknown dark matter decay product. This theory, proposed by Bartosz Fornal and Benjamin Grinstein of the University of California, San Diego, has the neutron decaying into a dark matter particle 1 percent of the time. This particle would have a mass of about 1 GeV, about 100 times lighter than the weakly interacting massive particles usually predicted by supersymmetry. If neutrons occasionally became dark particles, that would explain why neutrons disappear more quickly in the bottle experiment than proton decay products appear in the beam experiment. “If this turns out to be how nature works, this would turn out to be a very inexpensive way of trying to probe dark matter,” says Fornal.

However, new analyses have already constrained some of Fornal and Grinstein’s suggested experimental signatures, including a scenario that releases telltale gamma ray and one that produces an electron-positron pair.

The neutron lifetime has important implications for cosmology. For example, it helps determine the amount of light elements, particularly helium atoms, that formed from hydrogen right after the Big Bang. “Helium is made by protons capturing neutrons,” says Hickerson. “So the rate at which neutrons disappear from the early universe determines how fast they can [combine with] protons to form helium.”

Hickerson and his colleagues have created an open-source code called AlterBBN to simulate the production of light elements, in which the neutron lifetime is a variable. They then compare the elemental abundances produced in the simulations to spectroscopic observations of low-metallicity clouds of gas from the early universe (astrophysicists call elements heavier than hydrogen and helium "metals"). The astrophysical observations and simulations should agree with each other within their range of uncertainties, but the neutron lifetime is the limiting factor, says Hickerson. So if they can zero in on a more precise neutron lifetime, it could motivate astronomers to take a closer look at these gas clouds.

The UCNτ collaboration is planning to build an experiment where they count neutrons and their decay products simultaneously. “It’s basically like doing a beam and a bottle experiment at the same time,” says Hickerson. They want to include a neutron counter, proton counter, and electron counter in this experiment so that it would be sensitive to Fornal’s proposed neutron dark decay.

The beam experimentalists, meanwhile, are improving their proton counting and investigating their major systematics. Hoogerheide has high hopes for the future. “Given the number of projects working on it, we should have a resolution to this within the next five to ten years,” she says.

The author is a science writer based in Tucson, Arizona.