The APS Office of Government Affairs (APS OGA) and the APS Department of International Affairs have partnered to survey graduate students’ opinions about issues related to U.S. visa policies.

Specifically, the anonymous survey, which will circulate to members of the APS Forum on Graduate Affairs (FGSA) during July, will ask students whether they’ve experienced difficulties obtaining an F-1 student visa, which allows them to enter the United States to study at American universities. Participants’ identifying information will not be included in the survey results.

“This is, to my knowledge, the first time a widespread, systematic approach has been taken to understand visa issues encountered by physics students who wish to study in the U.S.,” said Amy Flatten, APS Director of International Affairs. “We hope that the survey will yield some quantitative data that can be shared with policymakers, along with compelling stories, to better illuminate the damage of visa issues to the United States’s reputation as an attractive place to study.”

Added Francis Slakey, APS Chief Government Affairs Officer, “We’re stepping up our use of data to make a more effective case for our science policy initiatives, and we plan to use the information to ultimately help continue to attract the best and brightest students to the U.S.” 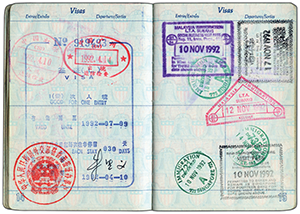 Allen Hu, APS Policy Analyst, said the FGSA survey will include questions such as:

Last year, a survey conducted by APS OGA of 49 of the largest graduate physics programs in the U.S. revealed that the percentage of international students applying declined by an average of 12 percent from 2017 to 2018. In response, APS members worked with APS OGA to write op-eds and meet with congressional staffers, both locally and in Washington, D.C., in an effort to persuade lawmakers to address the issue.

“America should always be looking to maintain a strong STEM workforce because it will help us compete in the global economy," said Durbin in a joint press release with the bill’s co-sponsors. “By denying international students with STEM degrees a chance to continue their work in America, we are shipping their talents overseas and won’t see the positive impacts of their American education. We think this bill represents a common sense idea that the Senate should take seriously.”

Added Harris, “Ours is a nation of immigrants, and our strength has always come from our diversity and our unity. We have invested in these students who have learned at our universities, and we must do everything we can to keep their talent here. I am proud to join my colleagues on this important legislation, which will ensure the U.S. remains competitive in the global economy, and hardworking students are welcome on our campuses and in our country.”

“International students are an important part of the STEM education and workforce pipelines, and working alongside American students, they offer diverse perspectives on some of the nation’s most challenging scientific research. This survey will help us better understand the issues international students face as they strive to study and work in the United States,” said Gross.

To participate in the anonymous FGSA survey go to surveymonkey.com/r/QL8NVNX. To tell your senator to support the Keep STEM Talent Act of 2019, visit the Visas & Immigration page.