Impact of Women in STEM Roadshow in India

The U.S. Department of State funded project "Women in STEM Roadshow" (WSR), which ran from October 1, 2017 to September 30, 2018, was a huge success and made an enormous impact on the young inquisitive minds of female students from minority and disadvantaged groups in India. The project focused on inspiring students to choose STEM (science, technology, engineering, and mathematics) fields for their education and research, study in U.S. universities for higher degrees, and use their knowledge for the development of India.

The goals of the WSR were to strengthen ties between people in the United States and India through exchanges of information, experiences, and expertise; support economic growth and development by creating awareness of higher education opportunities in STEM fields among girls and young women; and encourage more Indian students to consider higher education opportunities in the United States by interacting with alumni from U.S. universities in India and promoting the EducationUSA network that provides information on various U.S. educational institutions and how to study at one of them. 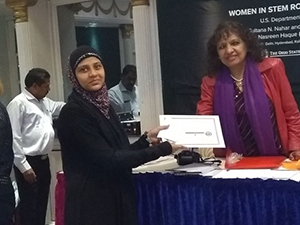 Workshop participant S. Nabiha (left) achieved Rank 1 position in the B.Sc. exam and is planning on further study after her M.Sc. She received her certificate from Sultana Nahar (right).

WSR was structured around nine workshops, each two days long, in six cities in India—Delhi, Hyderabad, Kolkata, Aligarh, Kurnool, and Patna—and included a year-long monitoring period to evaluate its impact. In total, the WSR reached 388 participants, most of whom were undergraduate students, a number of high school students, about 25 teachers, and 10 alumni from U.S. institutions. The number of applications overall was higher than expected in most places, and the number of Muslim student applications was significantly higher than other groups.

Sabiha Parveen, one of the U.S. graduates, wrote that she learned about the increasing need to encourage students to pursue careers in STEM disciplines. “In India, women in STEM fields lag far behind their male counterparts, and the problem is acute for women from minorities and disadvantaged groups,” she said. “They are interested in STEM, we just need to provide a spark for them."

A team of four led the WSR workshops: Anil K. Pradhan (atomic astrophysicist and Director of Indo-U.S. STEM Education and Research Center at Ohio State University (OSU)), Karen Irving (Ph.D. in Chemistry and STEM Education at OSU), Nasreen Haque (a physicist by training and President of Intalage Inc. U.S.A., involving teachers and students in the U.S.A. for STEM Education), and myself (physicist and founder of STEM education and research programs in many institutions in several countries and Director of WSR, OSU).

We had a dedicated and efficient Indian team of local experts, local contacts, and student volunteers in each location. Each local expert presented STEM contributions by women and the need for more women participating in STEM fields in India.

Swaleha Naseem, a local expert in Aligarh, wrote that "after attending the workshop, the students found themselves more confident and motivated about their fields. They acknowledged all the speakers at the workshop for their guidance on how to improve their CVs and how they can apply to U.S. universities for their higher education in STEM fields."

U.S. Consulate officials also joined us and presented inspiring stories in the Delhi, Kolkata, Hyderabad, and Kurnool workshops, while one representative spoke on EducationUSA. The U.S. alumni shared their experiences and spoke on the benefits of studying at a U.S. university. We invited one dedicated activist for education of women to be a chief guest in each workshop. The most notable one was the Governor of Manipur and Chancellor of Jamia Millia Islamia (a central university in Delhi), Najma Heptullah, who received her Ph.D. in zoology and became a faculty member at age 22 before moving into government and bringing about scientific and technological changes in India.

The impact of the workshops was extremely positive for the participants: In follow-up reports on the impact of WSR, many participants enthusiastically shared their academic progress reports to show how well they were doing in their pursuit of higher degrees in STEM fields. Most of them are achieving excellent GPAs—several ranking at the top of their class—attending and volunteering at conferences, preparing for graduate school entrance exams, and participating in (and winning) science competitions.

"The experience of meeting such great personalities was very inspirational especially for myself,” wrote a student from Aligarh. “The speeches delivered by Nahar, Anil and others were very inspiring and built up the students’ confidence, knowledge, and the enthusiasm to explore the world.”

APS Fellow Sultana Nahar is professor of astronomy at Ohio State University, co-director for the Research and Liaison Office of the STEM ER Center, and adjunct professor of physics at AMU.