Leon Lederman, an experimental particle physicist, director emeritus of Fermi National Accelerator Laboratory, and founder of the Illinois Mathematics and Science Academy (IMSA), died in Rexburg, Idaho on October 3. He was 96.

A recipient of numerous accolades, including the Nobel Prize in Physics as well as the National Medal of Science, Lederman led teams that discovered two elementary particles: the bottom quark and the muon neutrino. He was a Fellow of the APS.

“Leon Lederman embraced science broadly and deeply,” said 2018 APS President Roger Falcone. “He uncovered new physics, was a leader in educating students and the public, was a spokesperson for pushing the frontiers of physics, and guided major scientific institutions. His engagement, passion, and enthusiasm remain an inspiration to everyone who knew him.”

Lederman could have measured out his life in quips. His “unauthorized autobiography” states that “Leon Lederman is one of the oldest, barely active particle physicists seen at Fermilab. He began his career back in 1946 when delivering a telegram to someone in the Pupin Physics building of Columbia University; he got lost in the labyrinth of tunnels and emerged four years later with a Ph.D.” 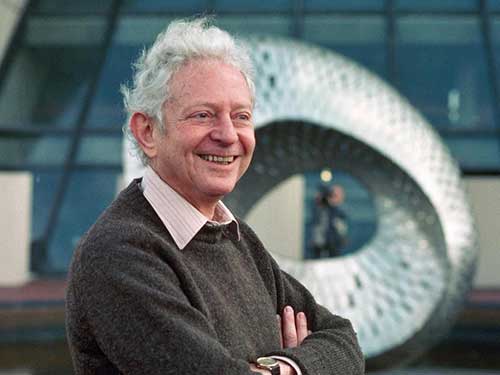 “He was very much a stand-up comedian,” said Nigel Lockyer, director of Fermilab. “When he got the Nobel Prize, we all poured into the auditorium … and spent the whole time killing ourselves laughing at his jokes.”

Science and comedy were not separate preoccupations for Lederman—they were inextricable. Science wasn’t meant to be kept in a stuffy lab; it was fun, and therefore meant to be shared with others. To that end, Lederman started Saturday Morning Physics in 1980, which has managed to trick thousands of impressionable young minds into learning physics instead of watching cartoons. Five years later, he founded IMSA, now one of the top public schools in the country.

Former students expressed their gratitude toward Lederman on Tuesday:

“[IMSA] sparked my passion for science, which is still burning a decade after I entered her doors. Thank you, Dr. Lederman. <3”

Leon Max Lederman was born in New York City on July 15, 1922, to Minna and Morris Lederman. He graduated from the City College of New York in 1943 and enlisted in the Army, serving in France and Germany. Back in the States, Lederman learned to love physics at Columbia University, where he eventually became a professor and made prolific discoveries.

In 1956, he discovered the neutral K meson, which proved that charge is conserved in weak interactions. The next year, inspired by promising results from his colleague, C. S. Wu, he performed his own experiment to observe parity violation, in typical Lederman fashion—by appropriating a graduate student’s experiment.

"It was 6:00 p.m. on a Friday, and without explanation, we took the student's experiment apart," Lederman said. "He started crying, as he should have."

Trying to violate parity in a weekend meant “overlooking niceties”: a coffee can, wooden cutting board, orange juice bottle, and a can of Coca-Cola were all used as part of the apparatus, which was held together by Scotch tape.

In 1962, with Jack Steinberger and Melvin Schwartz, Lederman discovered the muon neutrino, for which the trio would share the 1988 Nobel Prize in Physics.

But Lederman wasn’t always successful. In 1976, at Fermilab, he and his team thought they’d discovered a new particle with a mass of 6 GeV, publishing their results in Physical Review Letters. It turned out there wasn’t a particle there, so the data blip was named the Oops-Leon. (The next year, they discovered the actual Upsilon particle.)

Lederman moved to Fermilab in 1979, where, as director for the next decade, he delighted scientists and visitors alike with his leadership and scintillating personality. Under his watch, Fermilab constructed the Tevatron, then the most powerful particle accelerator in the world.

In his later years, he moved to Idaho with his wife Ellen Carr Lederman, who survives him. She took care of him after he was diagnosed with dementia. In 2015, he sold his Nobel prize to raise money for medical funds.

Lederman was also infamous for the name that he came up with the popularize the Higgs boson, calling it the “God Particle,” which was also the title of one of his more than half-dozen books. Beneath the flashy title were witty anecdotes, cogent explanations of science, and wisdom.

“Scientists, more often than not, are people,” he wrote. “We count among us minds of awesome power, those who are only monstrously clever, those possessed of magic hands, uncanny intuition, and that most vital of all scientific attributes: luck.”