On July 7, 2018 the APS Far West Section held a career workshop at SLAC National Accelerator Laboratory. After a similar event had attracted a rather large crowd in 2017, the section promised to make it a regular item on their meeting calendar. Career opportunities for physicists have become increasingly diverse and somewhat confusing over the past decade. Although the market for research jobs in academia or national labs has not significantly changed, there has been tremendous growth in opportunities for physics graduates in other sectors, e.g. the areas of data science, health science, general IT and so on. However, from conversations with students we learned that many are not aware of the variety of options and how to pursue them. They felt that an event providing not only some general information but also personal insight into the job market for physicists would be extremely helpful. Based on this feedback from the students, the section invited speakers and panelists to provide exactly this missing link. 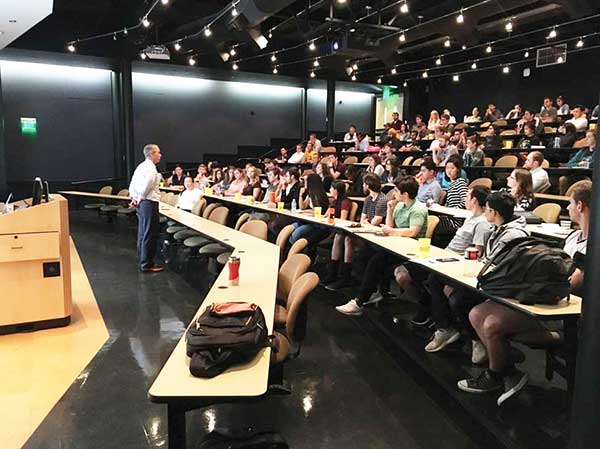 Peter Fiske opens the workshop by talking to students and postdocs about “how to put your science to work.”

The 2018 meeting was attended by close to 150 students from the region. The day started with a featured a presentation by Peter Fiske (Lawrence Berkeley National Laboratory), entitled “Put Your Science to Work.” Peter is a regular contributor to APS career events through his presentations and webinars. These events are crucial because “career development workshops at local and regional levels of APS have two advantages: they can be scheduled at any point during the year, and students don't need to travel as far as the annual meeting to participate,” said Fiske. “It's a great way for APS to show how it is concerned for the next generation of physicists.”

Fiske pointed out that physics students obtain a unique skill set during their studies that will set them apart from other job applicants. However, being part of the team is as important as standing out. His engaging presentation set the tone for the day noted Antonio Cuevas Rodriguez. “I really enjoyed the workshop and felt like I learned a lot about myself that I simply didn’t know before,” he said. “I am a rising junior at Stanford University, and never really thought seriously about careers outside academia until this summer. Peter Fiske’s presentation especially spoke to me and helped me get an idea regarding what I could do after college."

After a section-provided pizza lunch, which students enjoyed in the new courtyard on the SLAC campus, the program continued. The afternoon session comprised two career panels, with panelists from diverse backgrounds ranging from academia, research companies, data science, government policy, patent law, national laboratories, publishing, and startup companies. After talking about their career paths and providing the students with lots of personal stories, the panelists were ready to take questions from the audience. There was not nearly enough time for all the questions so many conversations had to be continued during the break. After the official workshop program ended, the participants had the opportunity to tour SLAC National Accelerator Laboratory, which led them from the early days of SLAC, the construction of the linear accelerator, and the first North American web server, to state of the art research facilities like the Stanford Synchrotron Radiation Light Source and the Linear Coherent Light Source.

As with the 2017 workshop, many of the participating students pointed out that the event has helped them to develop a better idea of what to do with their degree and which options are available to them. Based on the feedback, the section will try to organize another workshop at SLAC in 2019. In the meantime, if you are interested in the materials you can find them at the meeting webpage. In addition the APS career page contains useful information as well as links to webinars – including a version of Peter Fiske’s talk, “Putting Your Science to Work.”

The author is Staff Scientist at the Lawrence Berkeley National Laboratory and 2018 Chair of the APS Far West Section.